VAR survey: 40 per cent of fans likely to turn away from live football

A Football Supporters Association (FSA) survey has revealed that more than 40 per cent of fans will turn away from watching live football because of the impact of VAR.

In the largest fan consultation of its kind on Video Assistant Referees, the FSA surveyed more than 33,000 supporters with the results appearing to give an overwhelming view on the use of video technology to assist officials in its current format.

The FSA says the results must act as a warning to the Premier League about the current processes around VAR and its impact on supporters.

The survey also found that 95 per cent of fans who had experienced VAR in stadiums and 94 per cent who had watched matches on TV with VAR decisions said that the setup had made watching matches less enjoyable. 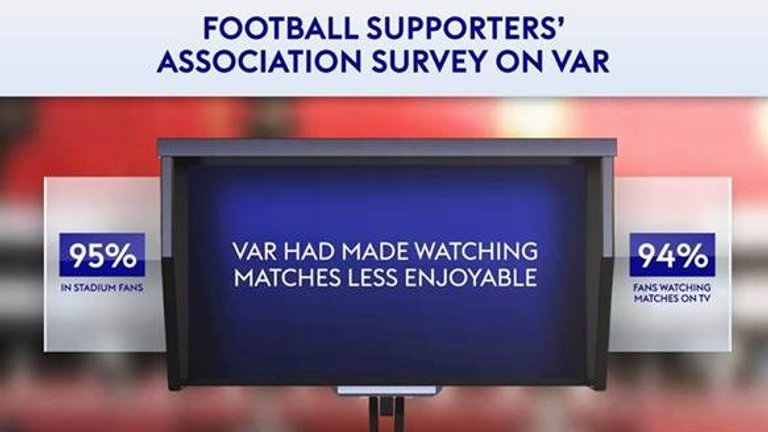 It was also revealed that fans surveyed believed that VAR decisions are generally not resolved in a reasonable amount of time, according to 91 per cent of fans in stadia and 86 per cent watching on TV.

Ninety-five per cent were also unhappy about the removal of the spontaneous joy of goal celebrations. 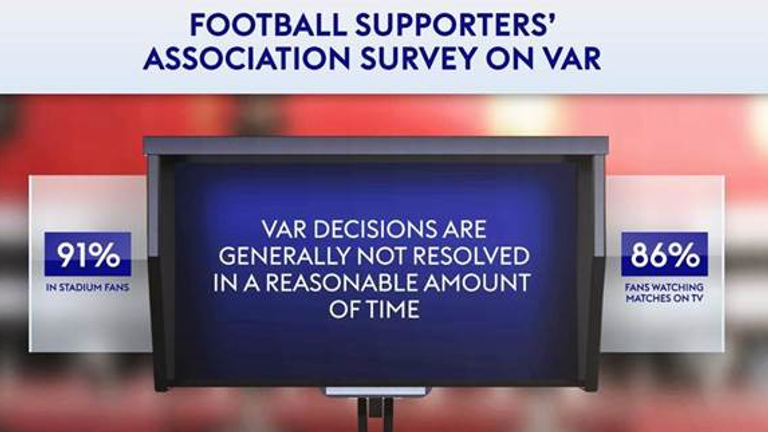 Of those asked, 39 per cent who had been Premier League season ticket holders before the Covid-19 shutdown in stadiums, said they were likely to go to fewer games in future as a result of VAR, while 44 per cent of all regular fans who attend matches said they would be attending less.

Only four per cent of fans asked said VAR has had a positive impact on the team they support, with 78 per cent believing it has had a negative effect. 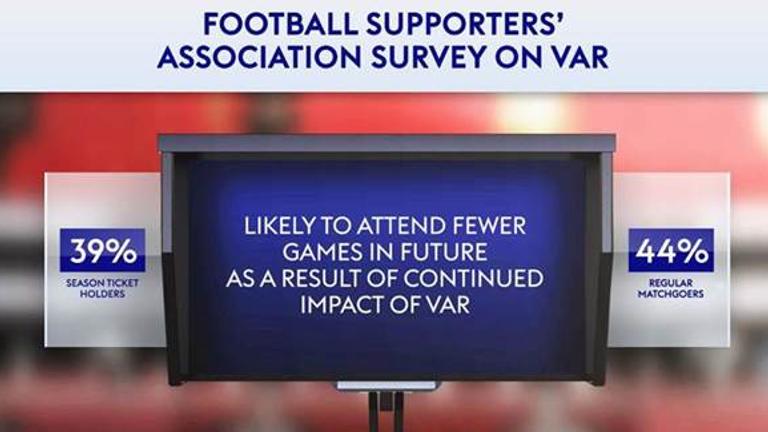 However, the Premier League says that the average delay caused by VAR per game is 50 seconds, while the average time taken for a VAR review is 70 seconds.

Its stats show that there were 129 VAR reviews in the season just finished (average of one every 2.9 games), while the average time spent by a referee at the screen during a VAR decision was 26 seconds.

It says the overall decision accuracy has increased from 85 per cent pre-VAR to 97 per cent with VAR. 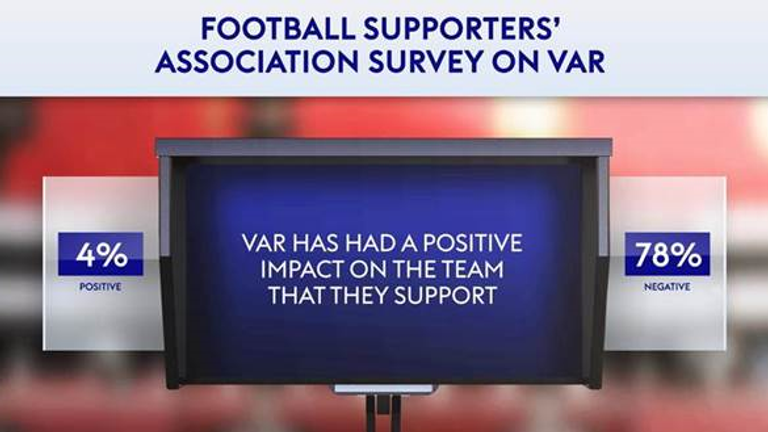 Fans are not completely against the use of technology, however. Indeed, 97 per cent of those surveyed agreed that goal line technology is good for the game.

Now the FSA wants to work with the game’s powerbrokers and lawmakers to bring about a positive change in the attitudes towards the use of VAR.

“The survey indicated 43 per cent of fans said that they would be likely not to continue watching football, live football, if VAR continues in its current form,” said Steve Moulds from the FSA’s National Council.

“So, I think that is a notice to broadcasters and the Premier League to say if your fanbase thinks this is a problem and they’re likely to stop watching the product, if you want to put it in those consumer terms, then maybe think about it very seriously.” 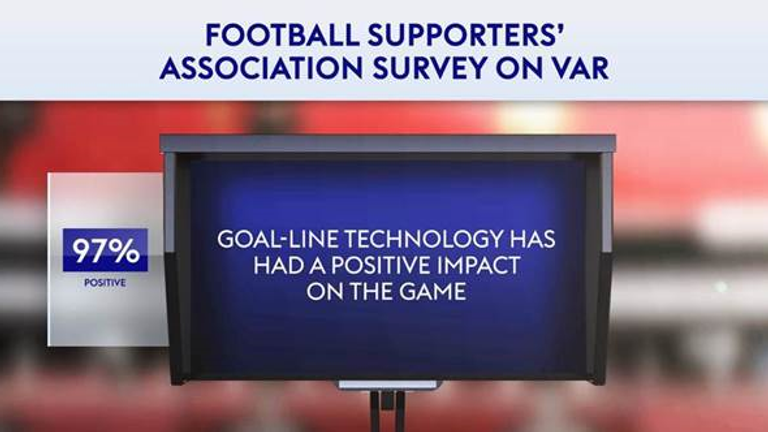 The PGMOL has already met with the FSA and put across its view on why VAR is good for football, but clearly supporters feel there needs to be a vast improvement in the way the technology is used.

“There’s quite clearly a disconnect between what goes on with the referee while they are reviewing situations and what the fans feel in that instance when you are in a match environment. We’ve had conversations about whether they need to play more of the replay footage that broadcasters use. 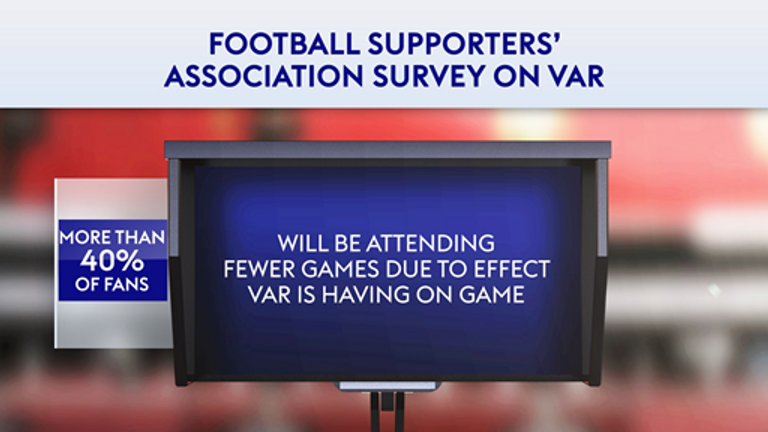 “I know some broadcasters have now got referees in studios commenting on the VAR decisions to help make those clearer. Obviously that can’t go on in a football stadium but there can be more information on the screens.

“Mic up referees and VAR conversations for when they go over to the VAR area to look at the screen. That might help improve things. I think more work can be done by everybody involved in football to communicate how VAR is used.”

Nearly 60 per cent of those surveyed strongly agreed that referees should take time to explain decisions clearly.

With the survey results showing that 56.49 per cent strongly disagreed with the notion that VAR has improved the accuracy of decisions and 21.65 per cent somewhat disagreeing, it would appear that VAR is seen by fans as currently undermining the trust in officials that it was meant to enhance.

Could better communication reverse all that?

Former Premier League referee and Head of Implementation of VAR in the Premier League, Neil Swarbrick agrees that improved communication would be a benefit: “Going forward, anything like that is going to be beneficial. 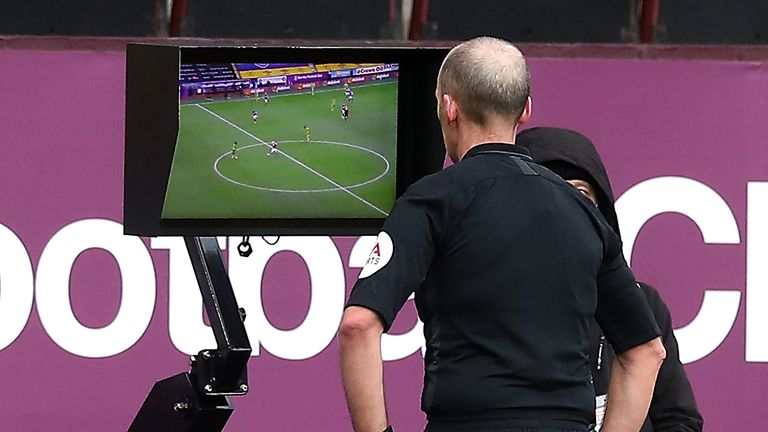 “But obviously our hands are tied, the protocols are overseen by FIFA and IFAB and we have to work to those protocols.”

Outside of improved communication, Swarbrick says VAR is a “work in progress” with feedback welcomed so VAR can be moved forward and put in a better place.

“We don’t want to say ‘get used to it’, we want to work with the fans, the clubs and the players and get it to a point where everyone is really comfortable with it, as it is in other sports.

“It’s down to us to make sure we get it more efficient, improve the timings, we improve the communication and we get it so everyone accepts what we are doing moving forward and it is improving the game.”