Beware Uruguay’s three amigos! Darwin Nunez is a mix of strike partners Luis Suarez and Edinson Cavani – fiery and volatile on the pitch, but more shy and reserved behind the scenes… the dynamic trio are ready to rumble at the World Cup

When your three strikers are Luis Suarez, Edinson Cavani and a player described as a mixture of the two, goals should be a given.

Suarez and Cavani, both 35, have ruled the roost of the Uruguayan strikeforce for the last 14 years. But as the old guard prepare for what is their fourth and probably final World Cup, Darwin Nunez, 23, is only just getting started.

Uruguay strikers are rarely boring. Diego Forlan was their charismatic frontman for much of the early-to-mid-2000s, before Suarez and Cavani came into the fold. Both continue to be huge personalities as well as prolific goalscorers. Nunez is no different. 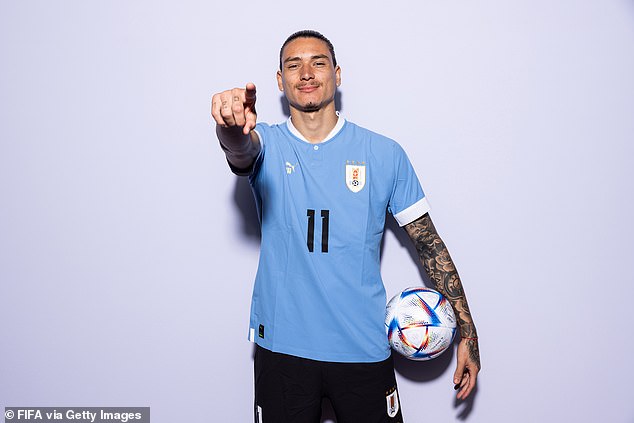 Although controversy has followed Suarez, Uruguay’s all-time leading scorer, Cavani is the more mild-mannered man who enjoys ballet away from the football pitch.

Nunez has traits of both. In games he is fiery and potentially volatile, like Suarez, but behind the scenes he is more shy and reserved, like Cavani. But like both, he knows where the goal is.

All three are strong, powerful and deadly finishers and have an edge about them, but not all three can start. It is likely to be a shootout between Cavani and Nunez for a spot alongside Suarez, should manager Diego Alonso opt to play two forwards.

‘We have goalscoring opportunities with our front three and we have flexibility with good, different options,’ Alonso said. ‘We will analyse every player and prepare to play some wonderful football.

‘With our strikers plenty is being put into having a good performance in the first game. We have much excitement about what we can produce.’ 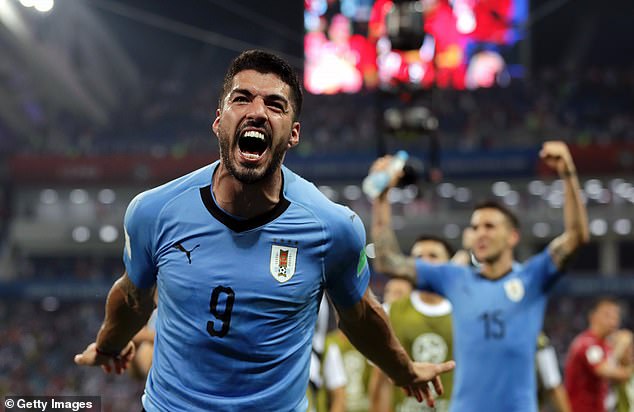 Suarez is back playing in Uruguay with Club Nacional, who finished their season on October 30. Despite joining halfway through the campaign, he was their third-highest scorer with eight goals in 14 games.

Cavani, who left Manchester United in the summer, also comes into this tournament in good form, having managed four goals in seven games for Valencia.

After a tricky start to life at Liverpool, with a red card on his home debut, Nunez was beginning to find his feet before joining up with his international team-mates. He has five goals in 10 Premier League games, with four of those coming in his last six matches. 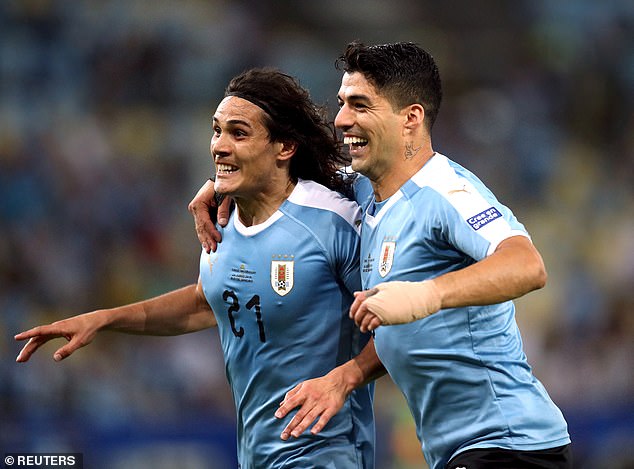 With all three strikers confident and in form, Uruguay are perhaps more dangerous than people might think. Group H contains South Korea, who they play this afternoon, Portugal and Ghana.

Alonso’s side do not appear to be in the conversation as one of the teams who could reach the latter stages but it is a stronger squad than many assume, with Real Madrid’s Federico Valverde and Tottenham’s Rodrigo Bentancur key players alongside experienced captain Diego Godin.

‘We are here to defend our country,’ an impassioned Godin proclaimed on Wednesday. With Suarez, Cavani and Nunez in the ranks, attack will be their best form of defence.