Unai Emery paid respect to former club Arsenal after beating Manchester United in the Europa League final. The 49-year-old spent 18 months in charge of the Gunners between May 2018 and November 2019 before being sacking after a poor run of results.

He returned to management at the start of this season at Villarreal and has now delivered a first major honour in the Spanish club’s history.

On his way to this year’s showpiece event, the Spaniard knocked out his former employers Arsenal in the semi-finals by achieving a 2-1 aggregate win.

The obvious temptation for Emery after last night’s triumph may have been to poke fun at the Gunners, but he instead paid respect to the north London side for aiding his development as a coach. 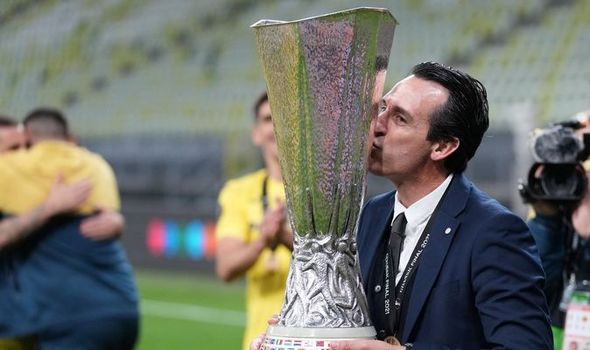 “I believe it’s not a sporting revenge at all,” he said after victory in Gdansk.

“I try to enjoy every moment, winning and losing. I try to create new circumstances, so everywhere I have been, even in England at Arsenal, I have learnt a lot, met many people, other cultures and football.

“At the end of that story was professional frustration, but some other doors opened then.

“Winning today is a satisfaction, but for my club today, as it was when I was at Sevilla.

“When I was at Arsenal, we played a Europa League final and could not win but it is a process, from that game I learnt a lot to win this one maybe.”

Emery missed out on winning the 2019 Europa League final when in charge of Arsenal, suffering a 4-1 loss at the hands of Premier League rivals Chelsea.

He was then sacked six months later having achieved only four wins in the opening 13 matches of the 2019/20 league season.

Mikel Arteta was identified as the man to replace Emery, but has struggled to deliver major improvements.

The Gunners missed out on European football for the first time in 25 years despite beating Brighton 2-0 on the final day of the season last Sunday.

On failing to secure a place in the top seven, Arteta said:

“I’m sad because this club deserves to be delivered trophies and the Champions League. We haven’t managed that. It’s very challenging circumstances but we’ve tried to stick together and do our best. It’s not been enough.

“We have to be very critical of ourselves, of myself, and then prepare the best possible way for next season to take advantage of that.”