England manager Gareth Southgate says Trent Alexander-Arnold’s suspected thigh injury will be assessed over the next 48 hours, but admitted seeing the right-back limp off against Austria was “not a good sign”.

Alexander-Arnold pulled up in the final minutes of Wednesday’s 1-0 win at the Riverside Stadium after clearing the ball and was then supported while walking down the sideline to receive treatment from the England medical staff. It has raised doubts about the Liverpool defender’s availability for England’s Euro 2020 campaign, which gets underway in less than two weeks against Croatia at Wembley on June 13.

Speaking to Sky Sports News after the match, Southgate said: “We’ve got to see, it’s obviously not a good sign that he’s had to walk off the pitch, and he was in some discomfort.

“We’re so close to the finals that for any player, injuries makes them a doubt. But we will just have to see over the next 48 hours.” 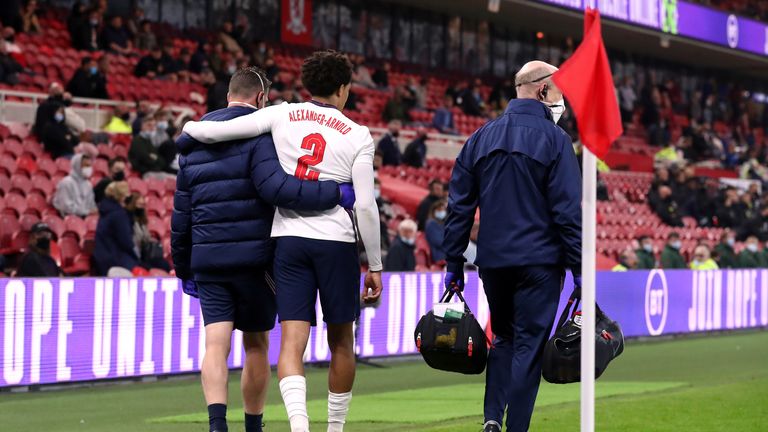 Asked who would get the call if Alexander-Arnold was ruled out, he said: “Let’s see how Trent is first then we’ll go from there.”

Alexander-Arnold was selected in Southgate’s 26-man squad for this summer’s tournament, but his inclusion was one of the biggest topics of debate in the build-up to Tuesday’s announcement. But, depending on the severity of the Liverpool defender’s injury, Southgate may be forced to make some late changes to his squad ahead of the start of the tournament on June 11.

Ben Godfrey, Jesse Lingard, Aaron Ramsdale, James Ward-Prowse, Ollie Watkins and Ben White were among those in the provisional 33-man squad that did not make the final 26.