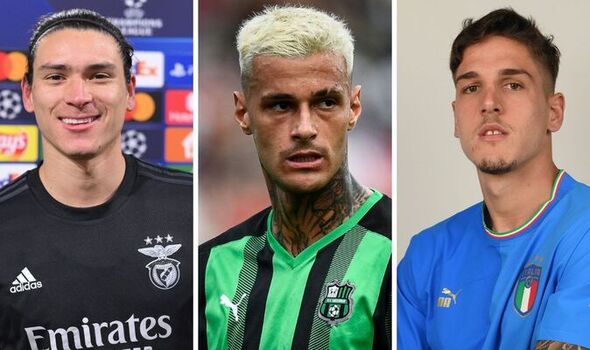 We are now just a matter of days out from the summer transfer window but that hasn’t stopped the activity amongst Premier League clubs ahead of a manic few months. Express Sport is on hand to provide you with all the latest rumours and gossip on Saturday, June 4…

Alessandro Bastoni has confirmed his client is happy at Inter Milan amid strong interest from Tottenham.

The Italian is Spurs’ top defensive target but is leaning towards staying with Inter.

“He is certainly a big fan of the team he plays for, so he will happily remain at Inter,” Tullio Tinti told Sportitalia.

“However, he is also a professional. This is football and he has to adjust. It’s clear he is very happy to play for Inter and feels this jersey like a tattoo on his skin.”

Yet it was not just any offer as according to Correio da Manha the Red Devils have submitted a player-plus-cash proposal involving Andreas Pereira.

The Brazilian spent last season on loan at Flamengo and sensationally, he recently caught the eye of United’s own scouts, sparking optimism he could still have a future at the club.

Now United are prepared offer him to Benfica as part of their attempts to secure the services of Nunez.

It’s unclear whether Benfica are willing to consider swap deal offers for Nunez, who they value at £67m after he hit 34 goals in all competitions last season.

Arsenal have seen an offer in the region of £34m rejected for Sassuolo striker Gianluca Scamacca, according to reports in Italy.

The target man has had an impressive season in Serie A, where he registered 16 goals for his club.

The Gunners have seemingly taken note and now Italian journalist Alfredo Pedulla suggests an offer of £34m has been rejected by Sassuolo.

Mikel Arteta is looking for a replacement for Alexandre Lacazette, who Arsenal confirmed is on his way out of the club on Friday. The Frenchman has agreed to rejoin Lyon.

Newcastle have reportedly seen an offer in the region of £54m rejected by Roma for Nicolo Zaniolo.

The Italian playmaker recently netted the winner for Jose Mourinho’s side in the 1-0 UEFA Conference League final victory over Feyenoord in Tirana.

Sky Italia claim Newcastle have made their move by launching a blockbuster offer that has been rejected by Roma.

The Magpies are expected to continue their excessive spending following a productive January but Eddie Howe’s purse strings may be restricted by FFP.

Liverpool forward Sadio Mane has confirmed he will pursue an Anfield exit this summer, while away on international duty with Senegal.

He told press: “60%-70% of Senegalese people want me to leave Liverpool? I will do what they want. We will soon see.”

Southampton are believed to have a sell-on clause that will see them make a small profit from any figure Liverpool receive for Mane over £34m (what the Reds forked out in 2016).

Bayern Munich remain the frontrunners with talks set to commence with Liverpool in due course.