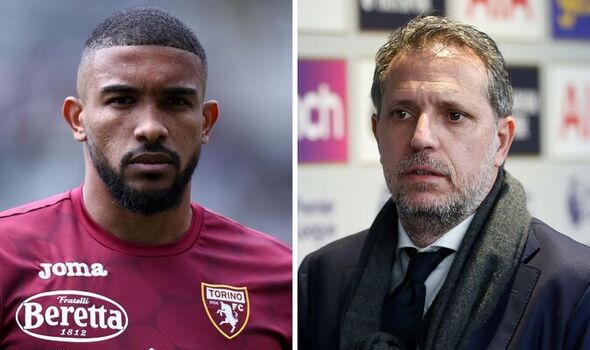 Tottenham are reportedly focusing their efforts on signing a central defender with a meeting planned this week to discuss a possible move for Gleison Bremer. With Spurs returning to Champions League football next season, Antonio Conte wants to bolster his squad in all areas.

Ivan Perisic has arrived to offer some versatility down the flanks with his ability to play as an attacking wing-back or further forward. Fraser Forster also comes in as the deputy goalkeeper behind Hugo Lloris after Spurs opted against signing Pierluigi Gollini on a permanent deal.

But improving the centre of defence has long been a top priority for Conte heading into the summer transfer window. Bremer has emerged as one of several targets Tottenham are looking at with Torino said to be asking for a fee in the region of £25million.

The 25-year-old earned rave reviews for his performances in Serie A last season with Torino at one stage battling for a European qualification spot. His performances saw him pick up the prestigious award for being Serie A’s best defender.

JUST IN: Tottenham may have secret weapon next year in star who Mourinho rated

Bremer is now attracting interest from clubs all over Europe and Tottenham are hoping to make an impression on the defender. According to Tuttosport, Tottenham will host a meeting in London ‘this week’ with Torino sporting director Davide Vagnati.

The main topic of discussion will be surrounding Bremer’s future and whether Tottenham can persuade the defender of a move to north London. Paratici is said to be keen on bringing the defender to Tottenham, but Bremer’s ‘preference’ is reportedly a move to Inter Milan.

It may end up coming down to who is willing to pay the most, but Inter and Tottenham have already been closely tied in this summer’s transfer window. Perisic has made the switch from the San Siro to Tottenham while Inter defender Alessandro Bastoni is also being linked with a move to Spurs.

Inter may currently be leading the race for Bremer’s signature, but Vagnati recently admitted that any suggestion a deal is close is wide of the mark. “There’s a lot of interest in him, we’ll have to decide along with the player what the best move for him is,” he said.

“A lot of movement around his situation which is to be expected. [Inter are] a big team with a great tradition, they’re a possibility, but to say that Bremer is close to the Nerazzurri would be an exaggeration.”