Tottenham could find themselves in direct competition with Real Madrid as the search for their next manager drags on. Spurs chairman Daniel Levy has been looking for a successor to Jose Mourinho since April 19 and is reportedly interested in hiring Inter Milan boss Antonio Conte.

Conte’s future at Inter has been the subject of intense speculation over recent weeks, with the Italian club shrouded in uncertainty.

Inter sealed their first Serie A title for 11 years earlier this month but the aftermath has been overshadowed by events off the pitch.

The club’s Chinese owners Suning are experiencing financial difficulties, partly because of the coronavirus pandemic and have been seeking investment since October.

Inter recorded a loss of £87million in 2020 and reportedly will have to sell some of their assets this summer in order to plug the shortfall.

Romelu Lukaku, Lautaro Martinez and Achraf Hakimi have all been linked with summer transfers, while Conte’s future at the club is also in doubt.

The 51-year-old former Chelsea and Juventus manager has one more year on his contract but is reportedly seeking assurances over the club’s finances and ambition before he commits to the project.

JUST IN: Memphis Depay could change mind on Barcelona deal because of Laporta 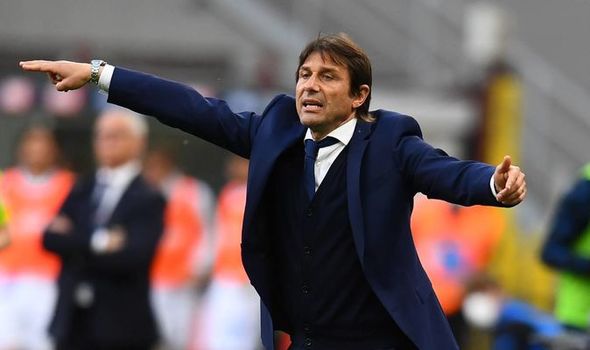 That is where Tottenham and Real Madrid come into the picture, with both clubs seeking a new manager.

While Spurs are managerless following Mourinho’s departure and Ryan Mason’s interim stint coming to an end at the conclusion of the Premier League campaign, Real still have Zinedine Zidane at the helm.

However, his future at the club is under scrutiny amid reports club president Florentino Perez is keen on replacing him with Real legend Raul, former Juve boss Max Allegri or Conte.

Italian newspaper La Repubblica reports that Spurs and Real are both keen on Conte following developments in ‘recent hours’ on Tuesday.

According to Sport Mediaset, Conte met with Inter president Steven Zhang and directors Beppe Marotta, Piero Ausilio and Alessandro Antonello last week to ‘discuss the future strategy of the club’.

Conte could be of more interest to Spurs following the confirmation that Bayern Munich boss Hansi Flick will take over from Joachim Low as Germany manager after this summer’s European Championships.

The Athletic reports that Flick was a ‘strong candidate’ for the Tottenham job, but is now unavailable after signing up to manage Germany until Euro 2024.

On Monday, football.london reported that Spurs ‘have now decided on their top candidate’ and hope to appoint them ‘within the next seven to 10 days’.

The report states that both of Spurs’ top candidates are currently employed, meaning they will need to agree compensation to hire them.

Brighton’s Graham Potter, Ajax’s Erik ten Hag and Belgium boss Roberto Martinez are all mentioned as previous candidates, but Leicester’s Brendan Rodgers and Julian Nagelsmann, who is set to join Bayern Munich, are out of the running.