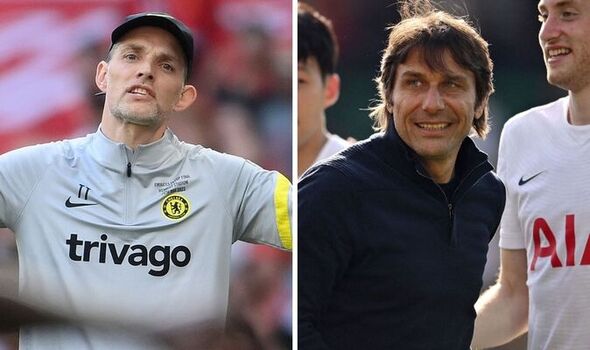 Tottenham are moving in a new direction this summer under Antonio Conte with the Italian head coach close to adding both Fraser Forster and Ivan Perisic to his squad. Spurs have predominantly done their business late in the transfer window with Daniel Levy renowned as a tough negotiator.

But Fabio Paratici has now taken most of the reins at the club with Conte also having a bigger say in transfers than previous managers. The biggest change appears to be on when Tottenham want their business done with Conte reportedly keen on having his new signings in place before the pre-season tour in South Korea.

Their first match of the summer comes against Team K League on July 13 with Tottenham playing in the Coupang Play Series. That leaves little over a month for Conte to get what he wants done in the transfer window.

The former Chelsea boss has made it clear on several occasions that he wants new recruits to help Tottenham’s chances of fighting further up the table and for trophies. And two new signings are expected to arrive at the club in the very near future.

Fraser Forster is close to signing as back-up to Hugo Lloris in goal after Tottenham rejected the chance to sign Pierluigi Gollini on a permanent basis. According to transfer expert Fabrizio Romano, Conte is also set for a reunion with Ivan Perisic.

The report claims that Tottenham have been working on a deal for ‘two weeks’ to try and sign Perisic. The Croatia international’s contract at Inter Milan was running out this summer and had an offer on the table to extend his deal.

But his dream was reportedly to move to the Premier League, with Chelsea also following Perisic’s situation closely. However, the Blues were unable to follow through with their interest ‘due to the sanctions’ placed on the club during the sale of the club.

Chelsea were sanctioned by the UK Government due to Roman Abramovich’s affiliation with Vladimir Putin, limiting their ability to discuss contracts and transfers. Tottenham have seemingly moved swiftly to beat Chelsea to the post to sign Perisic and a deal is expected to be announced shortly.

Perisic has long been linked with a move to the Premier League with Jose Mourinho trying to sign him at Manchester United in 2017. The winger admitted back in 2019 just how close he came to moving to Old Trafford to join Mourinho.

“How close was I to going [to Man Utd]? Very close,” he said. “It was an amazing thing for me when Jose called me. It was difficult to say no to him.

“In fact, I really, really wanted to join him and play for United. It was a dream of mine to play in all the big leagues. But it didn’t happen. It was painful for me. But I don’t want to go into the details. I only found out myself the real reasons two years later.”