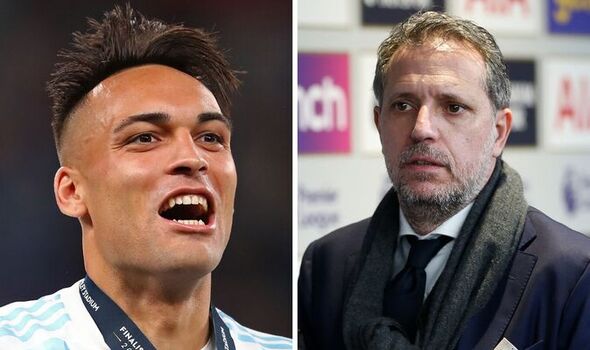 Tottenham boss Antonio Conte will be hoping to bring in another striker to provide competition for Harry Kane next season and Lautaro Martinez may well be an option for the former Inter Milan boss. Conte struck up a strong working relationship with Martinez during their two years together at the San Siro.

Martinez had struggled to live up to expectation in his debut season at Inter before Conte arrived a year later and helped transform the Argentine forward. He scored 19 goals and provided 11 assists in Conte’s final season in charge, playing alongside Romelu Lukaku.

The Belgium international ended up leaving to join Chelsea in a club-record deal, but Lukaku is now sensationally being linked with a move back to the Italian club. Inter are keen to bring Lukaku back on a loan deal and Chelsea appear eager to strike an agreement as long as their demands are met.

Reports in Italy indicate that a move is imminent, but it’s unclear what that would mean for Martinez. The 24-year-old was Inter’s main man through the middle last year, scoring 25 goals in all competitions.

He has publicly stated that he wants to stay at Inter, but GiveMeSport claim Martinez is open to a switch to the Premier League. Chelsea are being linked with a move for the forward as a direct replacement for Lukaku in a potential swap deal.

The report claims that would be ‘complex’ and that no movement has been made on that front. And that could open the door for Fabio Paratici to swoop in and reunite Martinez with Conte at Tottenham.

The north London club are said to ‘still hold an interest’ in the striker and they would even hold an advantage over rivals Arsenal. It is said that a move to the Emirates is of no interest to Martinez after Arsenal failed to qualify for the Champions League.

That would potentially leave Tottenham in a straight fight with Chelsea for the signing of Martinez. And Conte’s past working relationship with the Argentina international could give them a slight edge.

Tottenham would have to smash their current transfer record to sign Martinez, with the forward reportedly valued at around £100million. Spurs have already confirmed two arrivals on free transfers with Ivan Perisic and Fraser Forster joining, while Yves Bissouma is set to complete his £25m move from Brighton this week.