Jose Mourinho could not resist a swipe at his former Manchester United player Paul Pogba, following his side’s 2-0 win over Brentford in the Carabao Cup semi-final. Spurs booked their place at Wembley where they will meet United or Manchester City courtesy of goals from Moussa Sissoko and Son Heung-min.

The Bees showed exactly why they’re knocking on the door of the Premier League though in the Championship promotion race and thought they’d levelled things up through top scorer Ivan Toney.

VAR, which was introduced for the competition’s semi-finals, ruled the 24-year-old’s equaliser out though for offside as Tottenham survived a scare.

Josh Dasilva was shown a straight red card late in the game following an accidental but dangerous challenge that drew blood from Pierre-Emile Hojbjerg’s shin.

Tottenham’s fighting spirit pleased boss Mourinho, but The Special One couldn’t resist making a dig at his former player Pogba when asked for his assessment on the game. 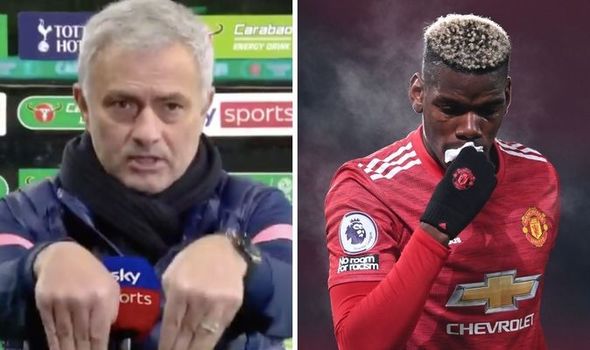 He told Sky Sports: “Solid enough to win. The game always under control.

“They had the offside goal that was a throw-in and like I used to say, when the ball goes in the air, you cannot press the ball.

“You just have to try and win the first and second ball.

“They had that goal and there was one penetration on the right-hand side where Davinson Sanchez was clever not to touch the guy.

“And the guy was clean not to do, what some other guys do [throwing his hands, making diving gesture].

“Apart from that, we were always in control of the game.”

Mourinho was referencing the Frenchman’s actions during United’s recent 2-1 win over Aston Villa.

The midfielder was spotted urging Luke Shaw to take a tumble with a hand gesture that was picked up by the Sky Sports cameras. 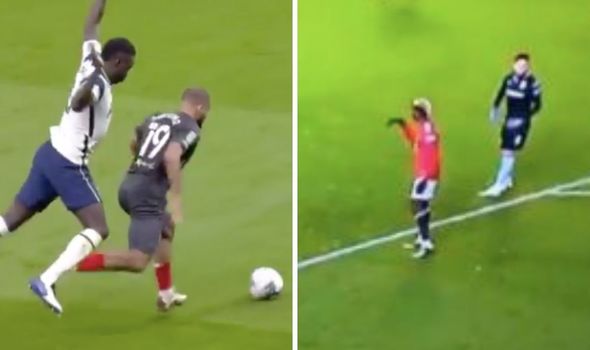 That’s because Pogba himself earned a controversial penalty in the game that was dispatched by Bruno Fernandes for the winning goal.

He appeared to trip over his own legs after contact from Douglas Luiz but VAR was happy for the penalty to stand following a review.

The decision caused huge controversy and was a major talking point in the aftermath of the win that put United firmly in title contention.

Pogba will now be looking to get one over on Mourinho, should United reach the final by beating their noisy neighbours.