Kane struck on the stroke of half-time after being released by Pierre-Emile Hojbjerg, and the Dane tucked in Spurs’ second following the interval after Rui Patricio had diverted Gareth Bale’s shot straight into this path.

Fabio Silva endured a profligate afternoon in front of goal as he missed a gilt-edged chance to haul Wolves back into the contest, with Nuno Espirito Santo’s side consigned to a 15th league defeat of the season. 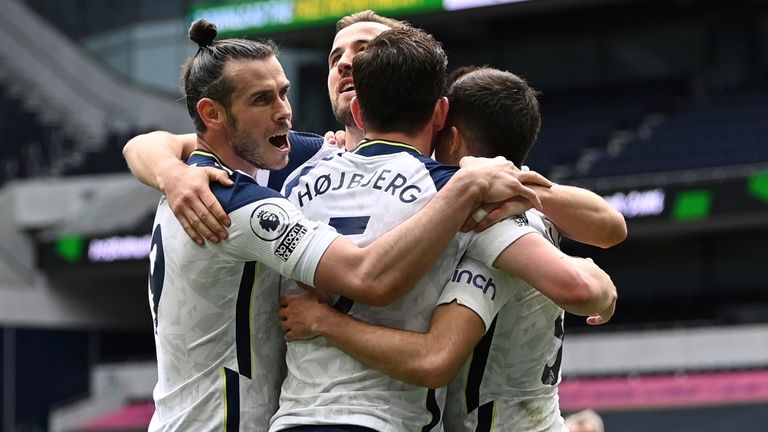 Man of the match: Conor Coady.

Defeat at Leeds last weekend meant Tottenham remained eight points shy of the top four heading into their remaining three games, so the message from interim boss Ryan Mason was clear before kick-off.

Only a win would do against a Wolves side who have failed to replicate the same level of performance that had seen them record back-to-back seventh-placed finishes in their previous two seasons.

That Spurs remain in contention to qualify for the Europa League is largely down to Kane’s precision and he was only denied an early opener when he struck the base of the post with a speculative drive from the edge of the box after just six minutes. 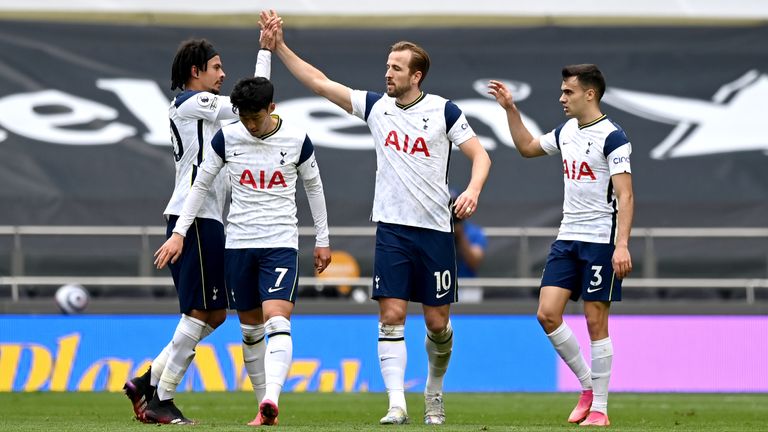 Nuno deployed a back four having made the same number of changes to his team, and they were set up to threaten on the counter with the pace of Adama Traore, who showcased his qualities with a bursting run away from the Spurs midfield moments later, but Silva dragged his shot wide via a deflection off Eric Dier.

The game descended into a Sunday stroll punctuated by Dele Alli’s rediscovered vim and vigour as he waltzed past Leander Dendoncker on one occasion, but Kane was unable to convert his cross at the near post. The hosts upped the ante as Heung-Min Son drew a smart save from Patricio.

As the interval approached, Conor Coady produced a miraculous double goal-line clearance to deny Kane after Patricio had spilled an initial corner, but Wolves’ reprieve was short-lived as the Premier League’s top scorer notched his 22nd of the season, collecting Hojbjerg’s pass before rounding Patricio to score with aplomb.

There was an anxious wait as VAR Stuart Attwell checked for offside, but the goal stood. Sky Sports’ Jamie Redknapp said: “The right-back was playing Kane onside and then it was complete panic from the Wolves defender and calmness from Harry Kane. It was brilliant. There was no panic, just brilliant forward play. Great players have more time than everyone else.”

Wolves could only improve, and they fluffed a glorious chance to level five minutes after the restart as Vitinha’s cross was headed straight at Hugo Lloris by the unmarked Romain Saiss. Spurs broke down the other end as Giovani Lo Celso found Sergio Reguilon, but his rising shot was tipped over by Patricio.

It signalled normal order to this affair being resumed and Mason was left scratching his head when Kane and Alli somehow contrived to strike both posts from the same phase of play. Alli broke free to run at the Wolves defence before threading the perfectly-weighted pass for Kane to strike across goal, but Patricio tipped his effort on to the woodwork before Alli’s effort on the rebound also bounced back out off the post. But Tottenham would double their lead shortly after the hour mark. Ki-Jana Hoever was caught in possession as Reguilon was rewarded for his persistence, and after the Spaniard found Son the ball was worked across the edge of the box to Bale. His strike was pure, but appeared too close to Patricio, whose tame save allowed the ball to fall at the feet of Hojbjerg for a simple tap-in.

It was turning into another limp display from Wolves, but the visitors really ought to have found a route back within three minutes as Morgan Gibbs-White’s low cross was dragged glaringly wide by the out-of-sorts Silva.

It was their best moment of the match, but another chance would swiftly follow as the tireless Traore cut inside Dier, having ran onto Hoever’s measured pass, but he dragged another effort off target.

Spurs had done the hard work but came close to a third when Japhet Tanganga rose to meet Son’s corner only to power his header wide at the near post – but two was more than enough.