Tom Heaton plans to challenge David de Gea and Dean Henderson for the first-team jersey at Old Trafford after agreeing a deal to join Manchester United.

A two-year contract – with an option for a third year – was agreed this week and brings to an end two seasons at Villa Park.

The 35-year-old re-joins the club where he began his career as a trainee in 2002 and has told friends he plans to push hard to become Ole Gunnar Solskjaer’s number one choice.

It looks increasingly unlikely that United’s present goalkeepers De Gea and Henderson will both be at Old Trafford to share the No 1 spot for United, with Henderson making it clear he will leave if he is not Solskjaer’s first choice.

The 24-year-old was left out of Manchester United’s starting line-up in Wednesday night’s Europa League final defeat to Villarreal.

Henderson took over league duties from De Gea at the start of March with United fifth in the league – going on to lose only once in nine encounters.

However, a below-par performance in the 4-2 defeat to Liverpool looks to have been the catalyst for De Gea’s return as first choice.

Solskjaer: We didn’t turn up | Two or three players needed Ole Gunnar Solskjaer felt his Manchester United players “didn’t turn up” on the big stage as his team slipped to a Europa League final defeat to Villarreal.

United had just two shots on target in the match as extra time failed to illuminate a poor contest, but Geronimo Rulli would prove the hero during a pulsating shootout, first converting his own penalty before keeping out De Gea’s effort as Unai Emery clinched a fourth Europa League title.

This felt a huge missed opportunity for Solskjaer as his quest for a first trophy as Manchester United manager goes on.

Ole Gunnar Solskjaer in the spotlight 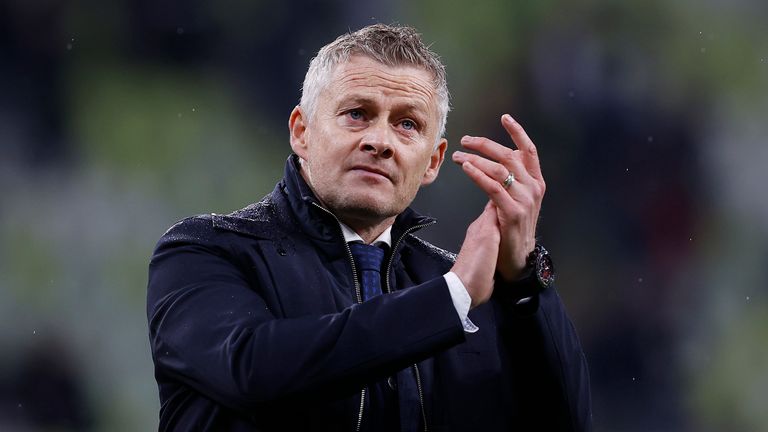 David de Gea will bear the brunt of the criticism in the immediate aftermath of the defeat – not just for his missed penalty but for his failure to save any of Villarreal’s. The Manchester United goalkeeper has not repelled a spot kick since 2016.

But once the dust has settled and the inquest begins, the spotlight will move from goalkeeper to manager. Ole Gunnar Solskjaer spoke about using this final as a “stepping stone” to “something better”. Instead it will go down as a golden opportunity missed.

Solskjaer has overseen progress at Manchester United, undoubtedly. Their league position has improved in each season of his tenure. Young players have blossomed under his management.

But he is well aware that this job demands silverware and that key ingredient is still missing. Reaching a first final felt like a significant moment for him after four consecutive semi-final defeats. But events in Gdansk raise the same old questions.