‘The greatest thing he has ever been a part of’: Vindication for Arnold, Socceroos as they slay the doubters

Australia is heading to the World Cup for the fifth time in a row – and their penalty shootout success over Peru is the ultimate vindication for beleaguered coach Graham Arnold, who kept the faith in his players despite mounting criticism of him, his methods and the talent at his disposal.

Arnold was amply rewarded for one of the biggest gambles in his long career when his call to substitute captain and first choice goalkeeper Mat Ryan and replace him with Andrew Redmayne for the shootout paid spectacular dividends when Redmayne saved the crucial spot kick to send Australia through to Qatar 2022.

Arnold has spent his life in the Australian game, having played for the Socceroos and been both an assistant coach and head coach at Asian Cups and World Cups. He has now matched Ange Postecoglou as a coach emerging from the A-League to take charge of the national team and guide it to the biggest tournament in world sport. 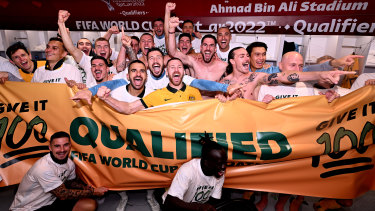 Australia is headed to another World Cup after a stunning finish to the qualifier against Peru.Credit:Getty Images

The coach was emotional in the aftermath of the victory, paying particular tribute not just to his players – who effusively returned the compliment in a series of post-match interviews – but his older brother Colin, who, he said, had been a rock upon whom he could lean all his life. 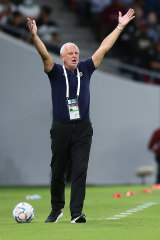 Graham Arnold reacts during the Socceroos’ clash with Peru.Credit:Getty Images

“I want to dedicate this one to my brother, Colin. When my parents died when I was young I didn’t have anyone to support me, my older brother has been there with me my whole life, he’s the number one,” Arnold said.

The now 59-year-old played at the same club as his older brother – Gwawley Bay Football Club in Sydney’s Sutherland Shire – from the age of six. His late parents, Barry and Fay, were committee members so the footballing bond with Colin runs deep.

The World Cup qualification is also a tick for the board of Football Australia, who were under pressure from the media and Australia’s more voluble Twitter critics to sack Arnold after the disastrous losses to Japan and Saudi Arabia in the final qualifying games.

Those defeats meant Australia was condemned to the nerve-shredding play-offs that Arnold has now helmed them through.

Contrary to the views of many outsiders, the team had full faith in their coach, and he certainly had not lost the dressing room: the level of commitment and buy-in during recent weeks as they prepared for these games against the UAE and Peru is testimony to that.

Captain Mat Ryan – who did not know he was to be substituted in the last moments of the game before the penalty shootout – paid tribute to the work the coach had done with the group before the friendly against Jordan and the Asia play-off against the UAE (which preceded the Peru match), saying that having the team in camp for a fortnight had really made a difference and allowed Arnold to get his ideas across properly. 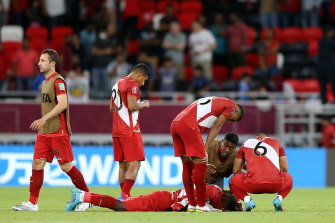 And the hero of the shoot out, Redmayne, hammered home that point in a post match media briefing.

“It’s hard to put into words how big a moment this is as a collective,” Redmayne said. “It’s a massive achievement.

“In his speech he [Arnold] addressed the group and said this is the greatest thing he has ever been a part of. I can’t probably repeat what he said, but he said we didn’t get much support from back home, but we knew as a group, as a cohort, the job that was ahead of us, what was on the line.

“This camp has been outstanding. The level has really gone up a couple of notches. That’s down to Arnie, and the belief and respect he gives to the players, all the little one-percenters, the man management he gives everyone.

“The people external to this group don’t see the work and the love and the passion that Arnie puts into every single player that comes into camp and puts on that green and gold shirt for every game we get the chance to play. 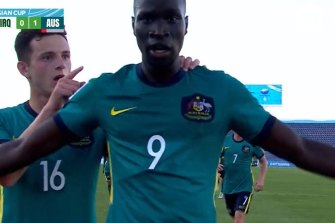 “Every player that has been a part of this qualification phase will say the same thing. Everyone is a part of it, and he makes everyone feel so welcome and so at home within this group. That’s all credit to Arnie”.

Arnold has now pulled off what many thought was impossible, but in many ways the task ahead is just as hard.

He has the next few months to decide on who will be in his squad – whether he will stay loyal to the players who did the job this time, or bring in younger players who can play a role in Qatar and in the future.

Ryan will still stay as his number one, despite Redmayne’s heroics, but if lanky defender Harry Souttar recovers from his knee reconstruction and shows he is back in form, he will come back into the reckoning.

Olyroo regular (and sometime Socceroo) midfielder Connor Metcalfe, who has moved to Germany, is another who will be pushing for a place in the final squad, while a bolter like the exciting but raw striker Alou Kuol could also be a wildcard.