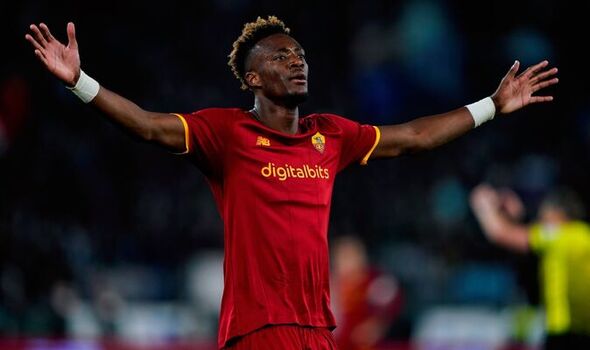 Chelsea were mocked by many after allowing Tammy Abraham to leave the club last year in a cut-price £34million deal, especially after seeing the young Englishman bang in the goals in Italy for Jose Mourinho’s Roma. However, it seems the Blues could have the last laugh – at the expense of some of their current stars.

Having swapped Stamford Bridge for the Italian capital last summer, Abraham has enjoyed a scintillating season so far. In 37 starts for Mourinho’s side, the striker has netted 23 goals – exploits which have seen his status soar across the continent.

While many may deem Chelsea’s decision to allow him to depart for as little as £34m last summer as a mistake, the Blues will spy a significant silver-lining to Abraham’s ascent this campaign. The fact that the forward can be re-signed, albeit for £67m – almost double last year’s transfer fee – in 2023, offers them an alternative in attack, if required.

Abraham has essentially issued Stamford Bridge’s current strike force with an ultimatum. The club’s current crop of misfiring forwards have until next summer to prove their worth or they could find themselves ousted for Abraham as a Roma return appears increasingly inevitable.

One would imagine the Blues’ preference would be to stick with what they’ve got given the vast investments made, but with each passing game, the Roma man is forcing his old side to reconsider. It’s a conundrum the club wouldn’t have anticipated when they splashed out £97.5m on Romelu Lukaku’s return last summer.

The Belgian has endured his fair share of well-documented struggles this season as his fairytale return to his beloved Blues has hit several bumps in the road. He’s only found the net 12 times this campaign with his long-term future still up in the air following his controversial comments during an interview with Sky Italia earlier in the season.

Timo Werner’s situation isn’t much better either. The German has hit a mere seven strikes in 28 appearances for Thomas Tuchel’s side this season as he continues to look out of his depth in the English game.

So sub-par have the striking pair been that Kai Havertz has emerged as Tuchel’s first-choice option up front. But the Blues shouldn’t be too perturbed.

Should their striker struggles continue into next season, Chelsea have a burgeoning back-up at the ready. Abraham is the ace up their sleeve who can be called upon if required in a year’s time. Not a bad last resort, don’t you think?