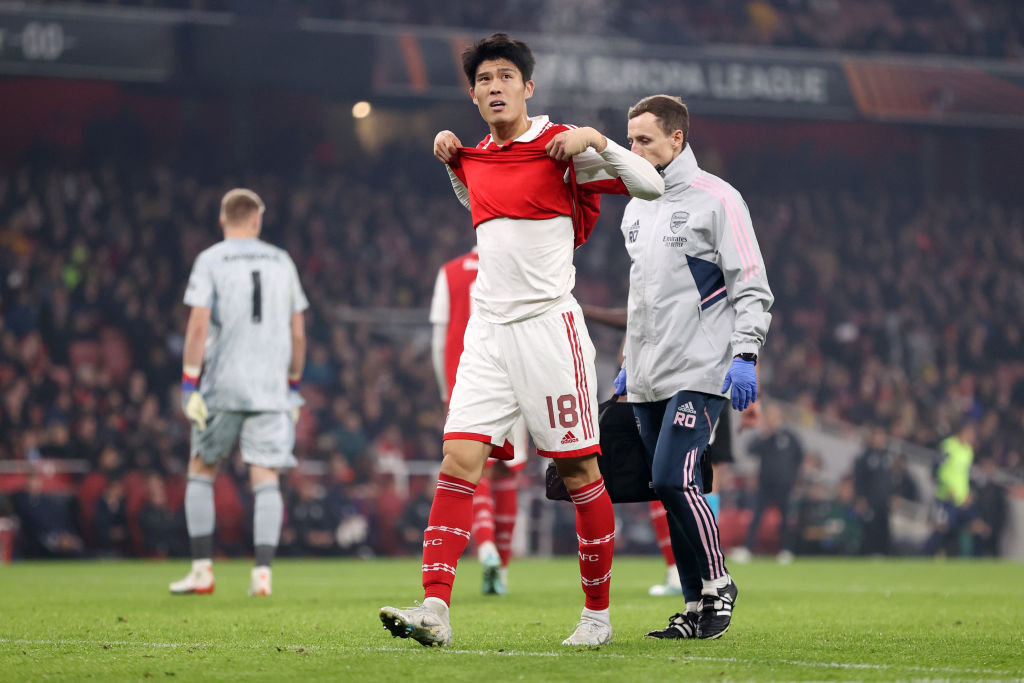 Takehiro Tomiyasu suffered a worrying muscular injury in Arsenal’s win over Zurich on Thursday night, although Kieran Tierney’s knock is not serious.

Tierney scored the only goal of the game as the Gunners secured top spot in their Europa League group at the Emirates.

The Scot was receiving some medical attention after the final whistle, but quickly dismissed any fears, saying it was just a painful bang, but nothing more.

‘All good, no problem just a sore one on the ankle. Maybe a bit swollen but it’s fine,’ Tierney told BT Sport after the win.

However, Tomiyasu’s problem is much more concerning, with the full-back coming off the bench on 73 minutes and then limping back off 15 minutes later, seemingly holding his hamstring.

Mikel Arteta could not confirm how serious the problem is on Thursday night, with scans and assessments to come.

‘We don’t know, obviously he had some muscular issue and he had to come off,’ said the Spaniard.

‘We didn’t want to take any risks and we will assess him in the next 48 hours and understand what has happened.’

Tomiyasu has been named in Japan’s World Cup squad, but a hamstring injury certainly puts his involvement in Qatar in question.

He will almost certainly not be fit for Arsenal’s trip to Stamford Bridge to take on Chelsea in the Premier League on Sunday.

Arteta’s side still have three more games before the World Cup break, with Brighton coming to north London in the League Cup and then the Gunners going to Wolves in the Premier League on 12 November.