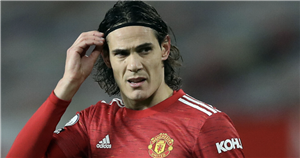 Ole Gunnar Solskjaer has reiterated Manchester United ’s stance that Edinson Cavani is no racist in the wake of his ban.

The Uruguayan striker was suspended by the FA this week over his Instagram post after United’s win at Southampton.

The comeback at St Mary’s back in late November saw Cavani come off the bench to set up one and score two in a 3-2 victory.

But his response to a message from a friend on social media after the match with the words 'Gracías negrito' landed him in hot water.

The term is considered affectionate in his homeland of Uruguay, and the 33-year-old deleted the post and apologised after being told it could cause offence.

However, he was then charged with misconduct and now the FA’s move to ban him for three games, on top of issue him a £100k fine, has hurt United.

Cavani misses tonight’s game with Aston Villa as well as the EFL Cup semi-final against Manchester City on Wednesday and the FA Cup third-round clash with Watford on January 9.

United insist Cavani made an innocent mistake and have urged the FA to make it clear in the written findings of the hearing that the striker is not racist.

And ahead of kick-off against Villa, Solskjaer made his feelings clear too.

The United manager said: “When the charge came through, you expected Edinson to get a ban.

“One thing for sure is he’s not a racist, there was no malice.

“His words were taken out of context, but then he accepted it and we just want to move on.”

Anthony Martial was picked to play up front in place of Cavani against Villa.

And the Frenchman is expected to continue in that role against City in midweek, although his form needs to improve as he went into the Villa game having scored just once in the Premier League all season.