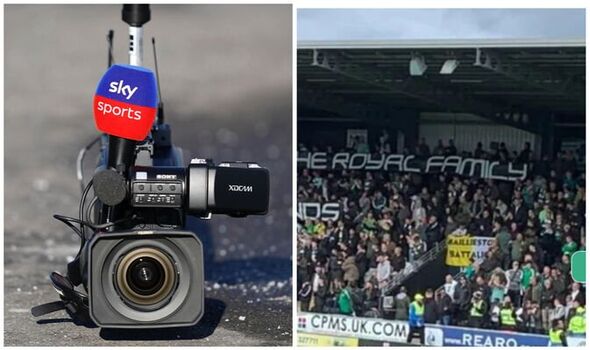 Sky Sports offered an apology to viewers who heard an offensive chant sung by Celtic fans about the late Queen Elizabeth II during a minute’s applause. Some supporters of the Scottish Premiership side showed their dissent towards the Royal Family ahead of their match against St Mirren on Sunday.

The broadcaster had already been warned  that they should mute their pitchside microphones, which could pick up offensive chanting. But some fans in the away end at Paisley 2021 Stadium could still be heard chanting: “If you hate the Royal Family clap your hands.”

Images shared on social media show that a banner with the same wordage was also raised. Sky were quick to offer an apology to those watching the match who could be offended.

It comes after UEFA announced they were investigating Celtic after an offensive banner was erected during the club’s Champions League clash with Shakhtar Donetsk last week. BT Sport honed in on a banner that read: “F*** the crown.”

“Please be informed that proceedings have been opened against Celtic regarding a banner displayed during their UEFA Champions League match against FC Shakhtar Donetsk,” a statement from the governing body read. “The UEFA disciplinary bodies will decide on the matter in due course.”

St Mirren announced in the aftermath that the customary one-minute silence that is being held at ground around the United Kingdom this weekend would be turned into an applause. It was an attempt to drown out any chanting that could be deemed offensive.

But that plan ultimately failed as Sky Sports viewers could clearly hear chanting from the Celtic supporters. The Daily Mail claimed that Sky Sports production staff had been warned that they may have to mute pitchside microphones during the minute’s applause.

Celtic boss Ange Postecoglu had urged fans to be respectful. “I have the same message to our fans that we always have,” the Australian said before the match. “As I said before the game [against Shakhtar], we will abide by the protocols. We wore black armbands on Wednesday night.

“I think there’s a minute’s applause, we will abide by whatever obligations and responsibilities we have as a football club. We will do that in a respectful manner. We want our supporters to do the same.”