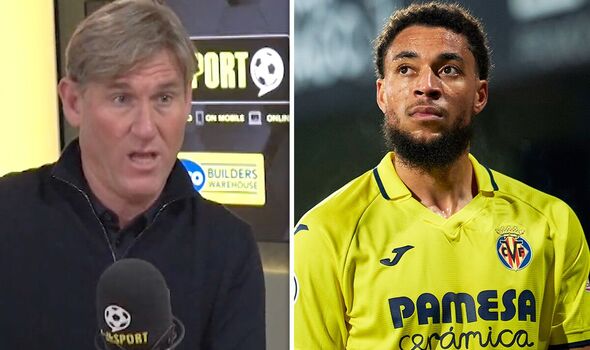 Everton have been torn apart by Simon Jordan following their failure to get a deal for Arnaut Danjuma over the line. The Netherlands star looked nailed on to join the Toffees but Tottenham have now hijacked the deal and are set to announce his arrival imminently.

Everton are in the market for reinforcements before the end of the January transfer window. The Merseyside club sit second bottom in the Premier League table and relegation is an ever-growing possibility.

Frank Lampard was sacked as Everton boss on Monday following a horrid run of results. Danjuma was a player Lampard wanted to sign but a deal was still expected to be completed despite his departure.

Villarreal are allowing the 25-year-old former Bournemouth forward to leave on loan for the remainder of the season. Everything had been agreed between Everton, the player and Villarreal.

Did he know? Lampard asked for patience in last Everton press conference

Danjuma had already carried out his media duties with Everton. However, the transfer was not 100 per cent complete and Spurs snuck in.

He is now in London ahead of a move to the Tottenham Hotspur Stadium. Jordan cannot believe Everton allowed Danjuma the power to change his mind when a deal was so far down the line.

The former Crystal Palace chairman says Toffees chiefs only have themselves to blame. Jordan told talkSPORT: “Get his bleeding signature on a piece of paper and fax it across to the FA yourself and register the player.

“Why let him swan off with his agent, who I know, and let him decide what he’s going to do next? If you’ve agreed something, you close it.

“You don’t let somebody walk out of a room, you close a deal. You don’t go ‘I’ll tell you what, have a think about it’.

“You close the deal, you’re negotiating with somebody and say ‘I’ll do this and you’ll do that, are we where we need to be? Fine, contract drawn, let’s go sign it’. You don’t go ‘sachet off and have a think about it’, otherwise you’ll get this.”

Like Everton fans, Spurs supporters continue to protest over their club’s ownership. Jordan is unsure whether either club is appealing to a player at the moment.

He added: “If you’re in this guy’s situation, you’ve got this shambles over here, you’ve got the bow-tie spinning, flowery-squirty chairman or owner [Farhad] Moshiri, or you’ve got Tottenham Hotspur that may well be under pressure because the people don’t like Daniel Levy. Where would you go if you’re the player?”