Burnley boss Sean Dyche is hopeful all his players who have been isolating
because of coronavirus will be back for Tuesday’s Premier League clash with
Manchester United.

The Clarets were without a quartet of players – believed to be Ashley Westwood, Josh Brownhill, Jimmy Dunne and Bailey Peacock-Farrell – for Saturday’s FA Cup victory over MK Dons because they had either tested positive or were having to isolate as a close contact.

Dyche now faces a dilemma over whether to throw them straight back in for the Turf Moor clash with United.

The Burnley manager said: “They’ve been double tested again and the timescale fits in. We’ve followed all the protocols so hopefully people will be available.

“The only challenge we, like many others will have is, if you’ve had players who have been locking down for 10 days and they come straight back in and are expected to play a game, and not just one game, four or five back to back.

“A lot of managers say players play too much. If it’s too much, you’ve got to be careful that they’re ready to play. Our lads are pretty fit historically so we’re pretty sure once we check them out they’ll recover well and be ready and raring.”

The behaviour of players in adhering to coronavirus restrictions has been under the spotlight in recent weeks, and Dyche has some sympathy with those who have been caught out.

He said: “Of course there’s been some unfortunate behaviour that is not the right thing but some of it, let’s face it, it makes a story. So I feel for the players a little bit because most, in my experience, are trying to do the right things.

“There have been some cases where footballers have been a bit naive in some of their actions. Ours so far haven’t been.

“We’ve had to just change (protocols) again because we’ve had a few cases, we’ve had to separate even further. Our staff meetings have changed – we’re in a huge room with distance everywhere, so we’re trying to do our bit. That’s all we can ask.” 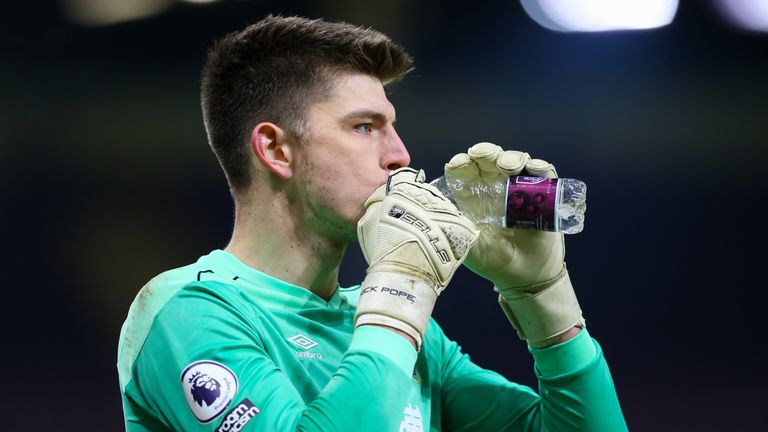 There has been further speculation about whether professional sport can continue with cases, rates of hospitalisation and deaths across the country remaining so high.

Dyche hopes football will be allowed to carry on, saying: “I think the Premier League are doing everything possible and mostly the players are as well. As long as the protocols are there and it’s as safe as it possibly can be, then I think football has to continue. I think it would be a drastic action to stop it now.”

Goalkeeper Nick Pope will be available for Tuesday after turning an ankle in training on Friday while Charlie Taylor, Dwight McNeil and Jay Rodriguez are all touch and go.

Victory for United would send them top of the Premier League standings, with Liverpool the latest leaders to hit a rough patch.

Dyche said: “It’s been a funny one, it’s almost seemed like no one quite wanted to grip hold of it and win their games.

“I don’t think anyone’s doubted their (United’s) ability for a long while, it’s getting the consistency into the team and winning games. They’re showing much stronger signs of that obviously over the last run of games.

“The main thing is about our performance levels, and I think they’ve got stronger as the season’s gone on. We’re on a good little run ourselves.”