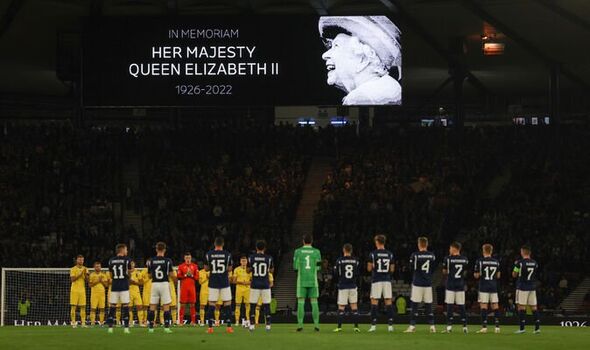 Some Scotland fans could be heard booing during a minute’s applause for Queen Elizabeth II before their Nations League clash with Ukraine on Wednesday evening. The Scottish Football Association announced a tribute for the late monarch on Tuesday, raising concerns that it would be met by a small protest.

Players from Scotland and Ukraine stood in the centre circle and performed a minute’s applause to remember Elizabeth II, who died on September 8. It was decided that an applause would be better than a minute’s silence in order to drown out dissenting voices.

However, boos could clearly be heard over ITV’s broadcast of the fixture. The pitchside microphones picked up protests, although the majority of the Hampden Park crowd could be heard applauding.

Commentator Sam Matterface alluded to the boos but pointed out that most inside the stadium had joined in with the tribute. The ITV name-caller said that boos had been “drowned out” by applause.