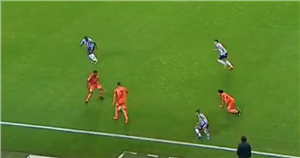 Cristiano Ronaldo's night went from bad to worse during Porto's 2-1 win over Juventus- after he was tackled by his own team-mate.

The Portuguese superstar was unable to influence the match as his side fell to a surprise first-leg loss on Wednesday night.

Mehdi Taremi gave the hosts an early lead in the contest before Moussa Marega doubled Porto's advantage in the second-half.

Federico Chiesa pulled one back for Juventus in the closing stages, but the Serie A giants have work to do in the second-leg.

Ronaldo's performance was best summed up by a coming together with team-mate Alex Sandro with 60 minutes on the clock.

The former Manchester United man received the ball and attempted to start an attack down the left-hand side of the pitch.

He advanced no more then ten yards before he encountered the club's stand-in skipper Sandro, who blocked his path to goal.

A rampant Ronaldo bounced off the 30-year-old midfielder and surrendered possession of the ball to Porto in the process.

It capped off a miserable evening for Ronaldo who managed just a single shot on goal throughout the entire contest.

He also played less passes than veteran defender Giorgio Chiellini, who was subbed off injured after just 33 minutes.

His night was compounded in injury time when he was denied a penalty after seemingly being brought down in the box.

Porto left-back Zaidu Sanisu appeared to take Ronaldo's legs, but first the referee and then VAR waved away his appeals.

He told Bobo TV: "[Ronaldo] scores a goal per game, it's true, but he struggles with Andrea's ideas.

"He's always been a bit selfish, he doesn't give a damn about others scoring goals, he's the kind of player who lives to score.

"He does not live for the game, for the great match, he lives for the goal and in this moment the situation is getting worse, the years pass for us all and he is having difficulties."

Juventus now have it all to do if they want to avoid elimination from the Champions League last-16 for the season season running.

The return leg will take place at the Juventus Stadium next month on Tuesday 9th March.