AS Roma advanced to the Europa League semi-finals with a 3-2 aggregate win over Ajax after Edin Dzeko’s late equaliser secured a 1-1 home draw on Thursday.

The Italian side will now face Manchester United, who beat Granada 2-0 on the night and 4-0 on aggregate in their quarter-final second leg, for a place in next month’s final.

Brian Brobbey struck for Ajax four minutes after his half-time introduction but Dzeko’s 72nd-minute finish levelled the scores in the quarter-final second leg.

The visitors dominated possession and had a second goal disallowed for a Nicolas Tagliafico foul but struggled to again break down a resolute home defence despite a late onslaught.

“We had more problems in Amsterdam, but today we controlled them well,” Roma coach Paulo Fonseca told Sky Italia. “Ajax are a very strong team with great quality, but defensively we played a great game. 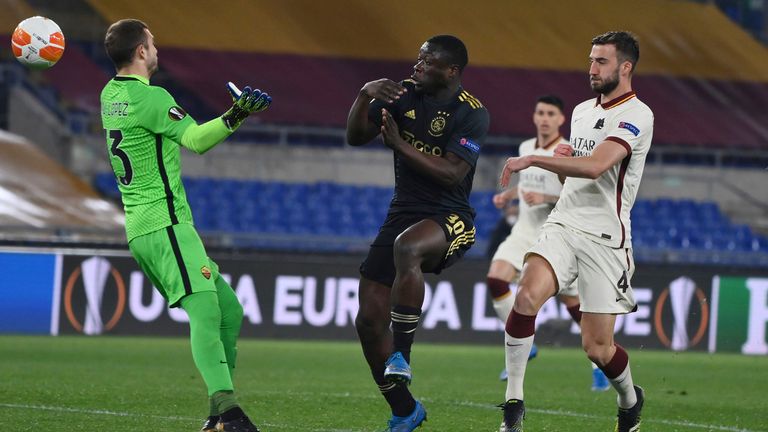 “It’s satisfying. Reaching a semi-final is cause for pride, and we are representing Italy at the moment that’s a source of pride for Roma.”

The capital club are Italy’s last remaining representative in European competition this season, and the clash with United will be their first European semi-final since a 7-6 aggregate defeat by Liverpool in the 2017/18 Champions League.

Roma’s chances were few and far between but striker Dzeko clinically took his when a deflected cross fell into his path at the back post for a tap-in.

First-half strikes from Paco Alcacer and Gerard Moreno guided Villarreal into the Europa League semi-finals with a 2-1 victory over Dinamo Zagreb on Thursday and a 3-1 aggregate triumph.

Villarreal dominated the game and almost took the lead after 25 minutes when forward Samuel Chukwueze rattled the post with a close-range volley.

They did not have to wait long to open the scoring, however, with Alcacer scoring 10 minutes later. Chukwueze was initially flagged offside in the build-up, but the goal was allowed to stand following a VAR check.

Moreno doubled the hosts’ lead three minutes before the break after Alcacer’s effort had been parried by Dominik Livakovic in the Dinamo goal following a marauding run from centre back Raul Albiol to tee up the chance.

Who will contest the final in Gdańsk? 🏆#UEL pic.twitter.com/WxoEC80WAj

The visitors rallied after the break and Geronimo Rulli was forced into a couple of smart stops in the Villarreal goal while at the other end Chukwueze and Moreno spurned chances to ensure victory.

Mislav Orsic pulled one back for Zagreb 15 minutes from time, but far from setting up a nervy finale the visitors never threatened to get back into the tie as the Spaniards held firm.

“We’ve been brilliant in this competition since the group stages. It’s just a shame the fans can’t be here, as these are the kind of matches you want to play in front of your fans – but this win is for them,” midfielder Dani Parejo said.

“We took the initiative and controlled things. Yes, they got one back, but we were the better side throughout the tie.”

Villarreal will face their coach Unai Emery’s former club Arsenal in the last four after the English side overcame Slavia Prague.

When and where is the Europa League final?

The Europa League final takes place on Wednesday, May 26 at the Gdansk Arena in Poland. The stadium was due to host the 2020 final, but after the tournament was delayed due to Covid-19, the showpiece took place in Cologne, Germany as Sevilla beat Inter 3-2.