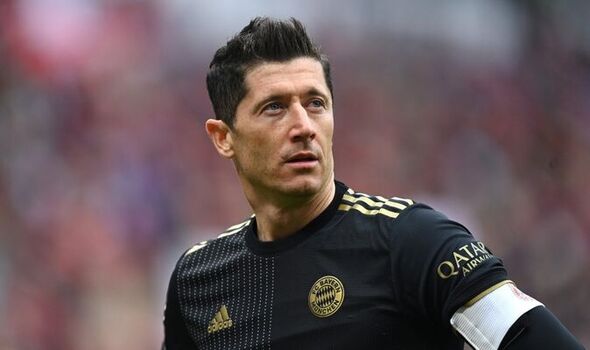 Bayern Munich striker Robert Lewandowski has told Barcelona to make it clear whether or not they would have the funds to sign him this summer, according to Spanish reports. Lewandowski wants a new challenge but is keen to maintain his relationship with Bayern, who have no interest in letting him leave before his contract expiry.

According to Mundo Deportivo, Lewandowski’s agent Pini Zahavi attended a meeting with the Bundesliga champions after their shock Champions League exit to Villarreal. Despite the 33-year-old’s desire to join Barcelona, Zahavi was told that he wouldn’t be allowed to leave until a worthy replacement was identified.

Therefore, Lewandowski has requested that Barcelona prove they have the financial power to convince Bayern to sell the prolific goalscorer. He wants to know if it would be worth pushing for an exit while there is a chance to make a move happen, rather than souring his strong relationship with the club.

The report claims there isn’t yet another summit scheduled between Zahavi and Bayern, so Lewandowski could take his future into his own hands. His contract with the Bavarian giants expires in 2023, and he isn’t believed to have been in talks over a new deal.

If Lewandowski learns that Barcelona are capable of completing a deal this summer, he could push Bayern to accept an offer rather than losing him on a free transfer next year. But their reluctance to let him leave is unsurprising, given the sheer number and frequency of goals he’s scored again this season.

Lewandowski, the European Golden Boot holder, has scored 49 goals in 46 games in all competitions this term. Since joining Bayern on a free transfer from Borussia Dortmund in 2014, he has netted 343 times in 373 appearances, cementing his legacy as one of the game’s greatest ever strikers.

Xavi Hernandez is spearheading a rebuild at Camp Nou after Barcelona were left reeling by Lionel Messi’s shock exit last summer. A disastrous start to the campaign prompted Xavi to replace Ronald Koeman in the hot seat and has made a somewhat positive start.

The Spaniard signed three Premier League attackers in January – Pierre-Emerick Aubameyang, Ferran Torres and Adama Traore – but is set to opt against making the latter’s loan permanent. So he’s eyeing a further addition at the end of the campaign, and Lewandowski is firmly on his radar.

Want the latest Premier League news as we publish it on Express Sport? Join our brand new Facebook group by clicking here.