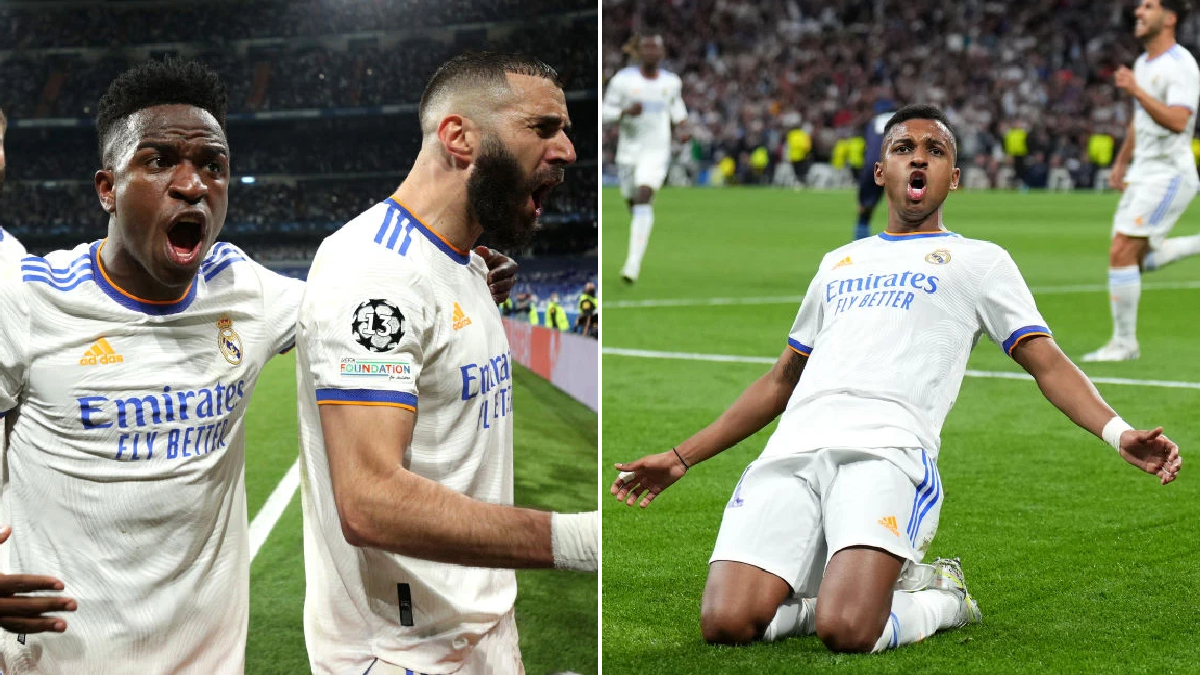 Real Madrid pulled off one of the most astonishing comebacks in Champions League history, netting two late goals against Manchester City at the Bernabeu to send the match to extra-time before Karim Benzema grabbed a winner from the spot.

City appeared to be cruising into the final after Riyad Mahrez’s 73rd-minute strike, with the visitors holding a 5-3 aggregate lead at the time, but substitute Rodrygo’s dramatic late brace levelled the tie and sent the match to extra-time.

Minutes after the match resumed, Benzema won and scored a penalty to put Real 6-5 up and City’s stunned players were unable to mount a response as the Spanish giants set up a rematch of the 2018 final against Liverpool.

The match was a feisty affair from the off, with an early challenge from Casemiro leading to a brief melee, while Benzema fired two half-chances over the bar – the sort he had been burying with aplomb in previous matches.

Kyle Walker had been rushed back into the starting XI to deal with the pace and trickery of Vinicius Jr. but the Brazilian continued to cause City problems down the left flank, blazing an effort high and wide.

The first big chance of the match arrived in the 20th minute and it fell to the visitors, with a dinked pass from Kevin De Bruyne finding Bernardo Silva on the edge of the six-yard box but his powerful shot was well saved by Thibaut Courtois.

Phil Foden went close with a right-footed volley shortly before half-time while Walker’s running duel with fellow speedster Vinicius was a fascinating battle, though in truth neither side looked particularly fluid in a tense and goalless first half.

Real flew out of the traps after the restart, though, with a long ball straight from kick-off releasing right-back Dani Carvajal but his cross was shanked wide at the far post by Vinicius.

City briefly looked a little nervy at the back, with Vinicius’ quick feet and sniping runs a growing menace; 70 minutes spent chasing the Brazilian eventually saw Walker forced off after another tangle with the winger and he was replaced by Oleksandr Zinchenko.

Moments later, City grabbed the goal that appeared to put the tie to bed with Bernardo feeding Mahrez after a rapid transition and the Algerian sent a typically venomous left-footed effort past Courtois at his near post and into the roof of the net.

Some Real fans had started to filter out of the stadium and Guardiola’s side looked the more likely to net again, with Joao Cancelo nearly scoring a screamer and Jack Grealish going close twice – with the first of those efforts cleared off the line.

But just as City fans were thinking about booking flights to Paris, Madrid pulled off the latest in a long line of scarcely believable escape acts in this season’s Champions League campaign.

A 90th-minute cross towards the back post was played back into the box by Benzema and substitute Rodrygo managed to nip in front of Ederson and poke the ball into the net to give the home side a glimmer of hope that they seized upon in incredible fashion.

Suddenly a pumped-up Bernabeu crowd seemed to be sucking the ball towards City’s goal and 88 seconds later, Real’s second shot on target of the match produced another goal to level the scores 5-5 on aggregate; Carvajal crossed into the box and Rodrygo was on hand again to direct a superb header past Ederson.

Having been within touching distance of the final City suddenly looked rattled and they did well just to survive the six minutes of added time, though there was no respite from Real’s suddenly overwhelming pressure.

Benzema had a great chance to put Real ahead for the first time in the tie and minutes later he was brought down inside the box by Ruben Dias, with the referee pointing to the spot. At the Etihad he had pulled off an audacious Panenka, but this time he slotted the ball into the bottom right corner to send the home fans into delirium.

City’s players looked dazed and confused, the rug ripped from beneath their feet, and struggled to reassert the control and dominance they had enjoyed for large periods of the match. They came close to an equaliser, though, with Fernandinho inches away from tucking into an empty net after Foden’s header was saved by Courtois, but Real held on with relative ease.

The Liga champions have arguably been out-classed in each of their ties against Paris-Saint Germain, Chelsea and now Manchester City, yet each time they have found a way to win and may well feel they are destined to win a 13th Champions League or European Cup title.

Real will take on Liverpool in the final at the Stade de France in Paris on May 28 – a repeat of the 2018 final which Madrid won – with the Merseysiders having survived a first-half scare of their own in Villarreal on Tuesday night to secure a 5-2 aggregate win and keep their quadruple hopes alive.