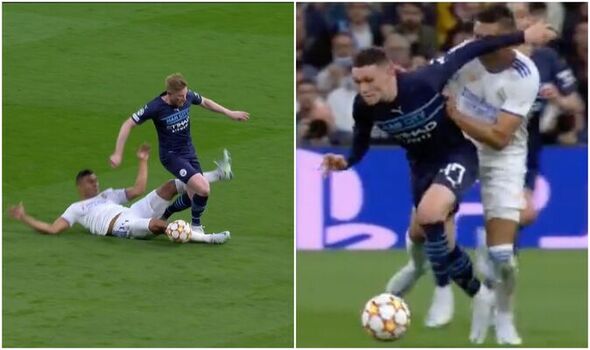 Real Madrid ace Casemiro was ‘lucky’ not to be sent off in the first half of Los Blancos’ Champions League semi-final second leg clash with Manchester City. the Brazilian lunged into Kevin de Bruyne within the first 10 minutes before dragging down Phil Foden before half-time.

It was a tight and cagey opening 45 minutes at the Bernabeu. Casemiro’s early challenge prompted a melee between the two sets of players.

The 30-year-old lunged into De Bruyne with his legs creating a scissor-like motion as he made the desperate attempt to win the ball. City players surrounded the referee demanding that Casemiro be booked.

As official Daniele Orsato made a decision on whether to card Casemiro, Aymeric Laporte clashed with Real midfielder Luka Modric. The Spain international appeared to slap Modric but fell to the floor clutching his face.

Somehow, Casemiro avoided a yellow card for his tackle on De Bruyne, despite it being reckless and possibly out of control. Orsato instead opted to book Laporte and Modric for their petty spat.

And the long-serving defensive midfielder made another poor challenge later in the half. City starlet Phil Foden attempted to break away on the counter attack, only to be dragged down by Casemiro.

Pep Guardiola’s side still had a chance to create a chance so Orsato initially allowed play to continue. Casemiro and Foden remained on the floor with the duo both hurt following the encounter.

However, the Italian referee failed to return to the incident and book Casemiro, prompting fury among those in the away contingent. Yellow cards for both incidents would have seen the player sent off and handed City an advantage as they sought to hold onto their 4-3 lead from a dramatic first leg.

BT Sport pundits Joleon Lescott and Rio Ferdinand were baffled that Casemiro escaped a yellow – and, ultimately, a red card – in the first half. Lescott said: “He definitely should have been carded at some stage. I think there were two incidents.

“I’ll tell you what has helped him, the melee after the first one and him staying down after the second one. He has recognised the situation on both occasions. He should have definitely received a yellow card at some point.”

As a replay showed Foden being dragged to the floor by Casemiro, Ferdinand added: “This one, he drags him down like a rag doll. He grabs his shirt and I don’t know how he doesn’t get a yellow card there. If that’s the letter of the law he should be off the pitch.”