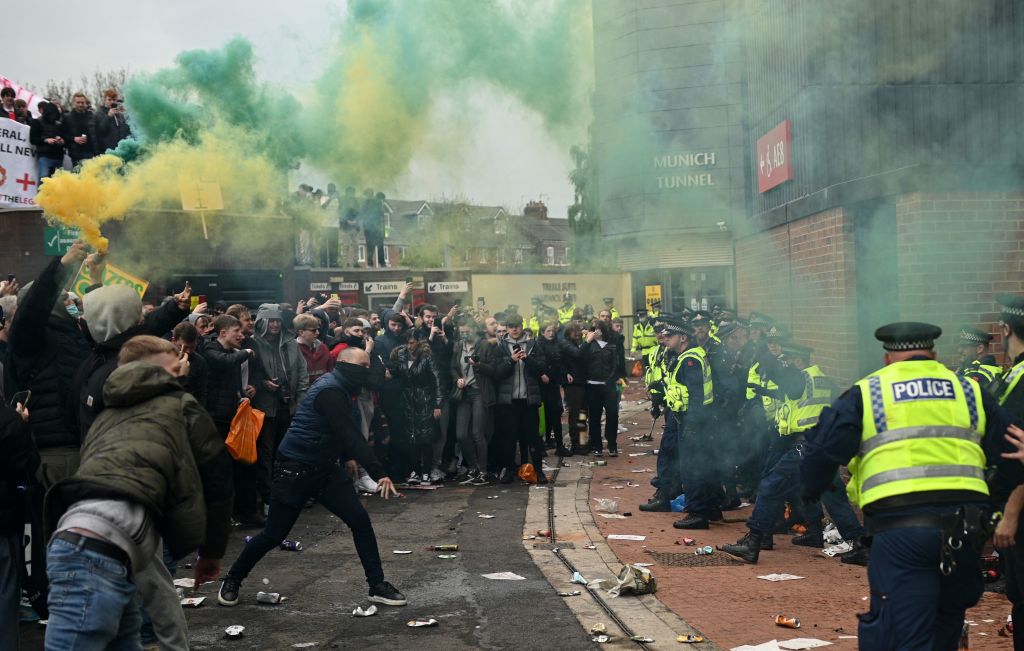 Greater Manchester Police have confirmed that two police officers were injured during the protests at Old Trafford on Sunday afternoon, with one suffering a ‘significant slash wound’ to the face and requiring hospital treatment.

The slash wound was caused by a bottle as flares were let off and barriers and bottles were thrown at police as the protests turned violent both outside Old Trafford and at the Lowry Hotel, where players were staying.

GMP’s Assistant Chief Constable Russ Jackson said, via Manchester Evening News: ‘The behaviour displayed today by those at both Old Trafford and The Lowry Hotel was reckless and dangerous.

‘We understand the passion many supporters have for their team and we fully respect the right for peaceful protest. Plans were in place to ensure this could happen safely, but it soon became clear that many present had no intention of doing so peacefully.

‘The actions of those today required us to take officers from front line policing and call in support from neighbouring forces to prevent the disorder getting worse.

‘At different points, bottles and barriers were thrown, officers assaulted and people scaled the stadium structure creating risk for themselves and officers.

‘We have launched an investigation and we will be working closely alongside partners to ensure we establish the full circumstances surrounding today’s events and prosecute those responsible.’

The total number of protestors was reportedly over 1,000 at Old Trafford and over 200 at the Lowry in the demonstrations that were known about by police during the week.

Despite being aware of the forthcoming actions, some of the protestors were able to gain access to Old Trafford, demonstrating on the pitch and Sky reporting that some had even reached the dressing rooms.

Stu Berry, Chairman of Greater Manchester Police Federation, said: ‘We witnessed appalling scenes this afternoon – police officers are not punchbags for people protesting for their cause.

‘I don’t think there’s a football fan out there who doesn’t support peaceful protest in favour of our national game. However, the minority who have soured those efforts with mindless violence against our colleagues must be identified and prosecuted for their actions today.

‘Our thoughts are with our injured officers this evening and we hope the media can give our members the recognition they deserve.

‘At the end of their shifts, hard-working police officers should be able to go home to their families in one piece. Not be rushed to hospital.

‘We will be seeking a review of today’s operational risk assessment and public order resources on behalf of our members.’

The Premier League released a statement condemning the actions of protestors, which read: ‘Following the security breach at Old Trafford, the Manchester United vs. Liverpool game has been postponed.

‘This is a collective decision from the police, both clubs, the Premier League and local authorities. The security and safety of everyone at Old Trafford remains of paramount importance.

‘We understand and respect the strength of feeling but condemn all acts of violence, criminal damage and trespass, especially given the associated COVID-19 breaches.

‘Fans have many channels by which to make their views known, but the actions of a minority seen today have no justification.

‘We sympathise with the police and stewards who had to deal with a dangerous situation that should have no place in football. The rearrangement of the fixture will be communicated in due course.’