Oxford 0-3 Blackpool: Neil Critchley admits three-goal lead is more than he could have hoped for… after Ellis Simms’ double and Ollie Turton strike gives Tangerines huge advantage in League One play-off semi-final

Blackpool boss Neil Critchley admitted the 3-0 play-off semi-final first leg win at Oxford was more than he could have hoped for – but he is adamant the contest is not over.

Ellis Simms struck twice after Ollie Turton’s opener in an emphatic victory that puts the Seasiders in a fantastic position to reach the League One final at Wembley.

Critchley said: ‘If you’d have said to me before the game that we would score three goals and keep a clean sheet, I would have bitten your hand off. 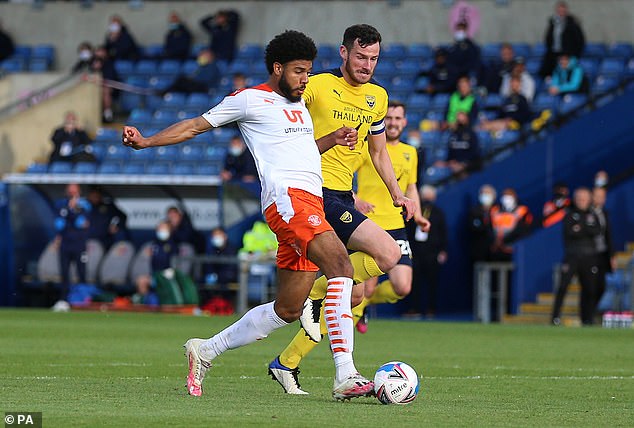 ‘But it’s only half-time and Oxford have enough quality in their squad to come back. They were the third highest scorers in the division and they are certainly capable of scoring goals at our place.’

Opposite number Karl Robinson admitted his side’s chances of progressing were slim but insisted his players would head into Friday’s second leg with no fear.

‘The players are sad, but we will go into the next game fearless,’ Robinson said. ‘It is only half-time. Football’s an amazing sport and if we were to go through from this it will be the greatest achievement any football team has ever done.’

Oxford, who finished sixth, were playing in front of their own fans for the first time during the season, but it was the visitors who took control.

Critchley added: ‘Oxford started well with their supporters behind them creating a good atmosphere but we had our good moments too. Goals change games and fortunately for us they went for us. 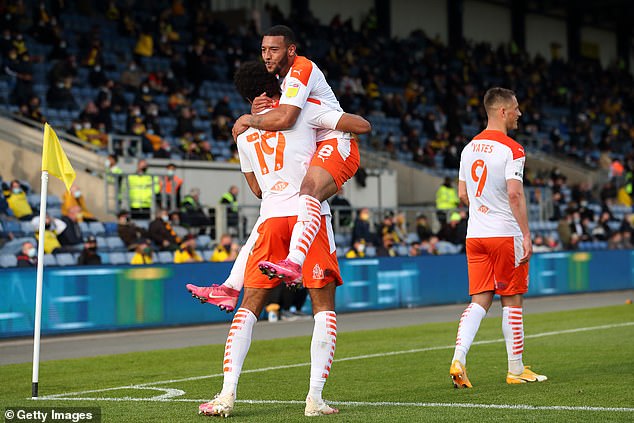 ‘It was good to score from a set piece and we work hard and practise them in training. That’s why we put Ollie Turton up there, and he stuck it in like a centre-forward! At 2-0 at half time you always know it’s that next goal which is going to be so important.

‘And the third goal for us, with Jerry Yates and Ellis Simms, was a terrific goal on the break. Oxford had some crosses and some momentum, but I thought we dealt with that well. Some of the things we’ve done well tonight are because of the good things we do on the training ground.’

Oxford boss Robinson felt James Husband should have been sent off, not booked, for a third-minute foul on Sykes but admitted his side were far from their best during the contest.

Robinson said: ‘It was blatant. Husband was coming across the cover and if Sykes had touched that ball he would have been in on goal. 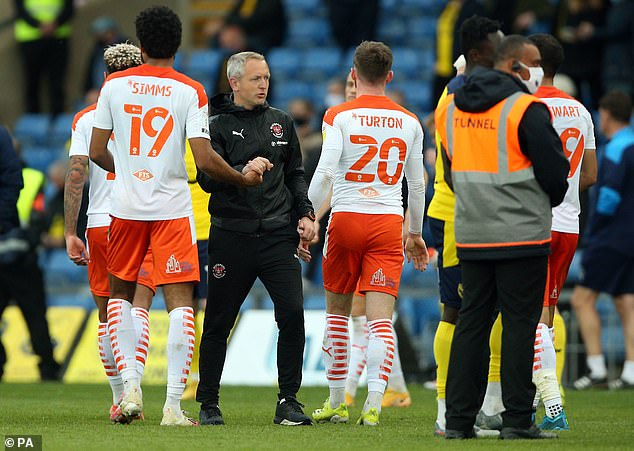 ‘Bobby Madley refereed quite well to be fair but that was a key decision in my view. But that doesn’t take away from the fact that we were soft and naive on set plays. We also had some good chances but we didn’t have that final pass.

‘We looked a bit fatigued at times, but you could say the same of Blackpool. It’s been a long season.’

Robinson will have selection concerns for the second leg at Bloomfield Road after Sam Winnall and Cameron Brannagan went off with hamstring injuries.