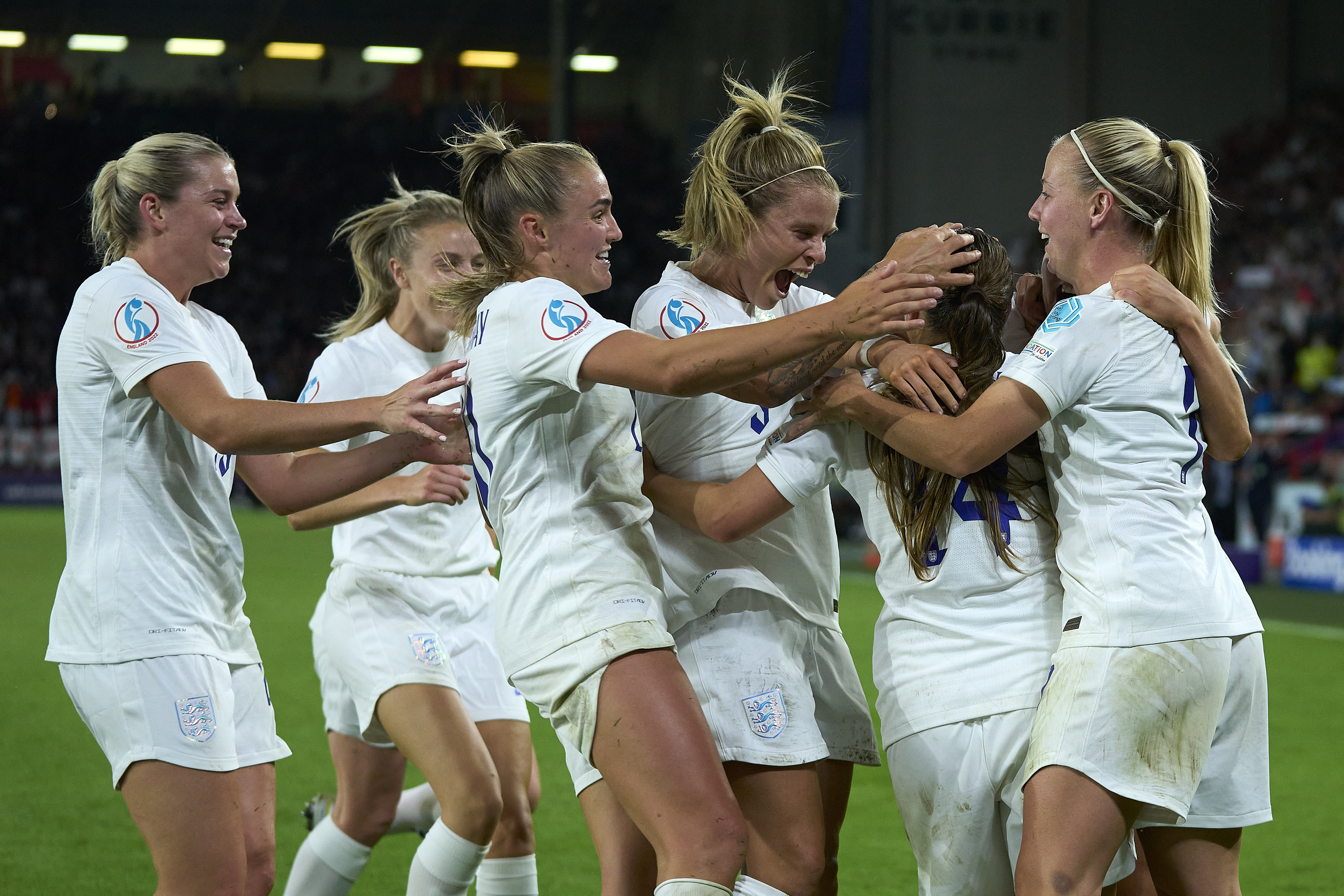 You can feel it in the atmosphere, hear it whispered in the breeze – football’s coming home. But actually, this time.

England’s unstoppable march through the stages of the Women’s Euros this summer has been a joy to witness. Gaining confidence and conviction in each round, the Lionesses’ 4-0 demolition of Sweden secured their place in the final and brings them one step closer to making history at Wembley.

As a seasoned women’s sport fan, seeing the swelling wave of support for these athletes has been both exciting and encouraging. Twitter threads waxing lyrical about the breathtaking beauty of Alessia Russo’s back-heel, Ian Wright telling the world this is as proud as he has ever been ‘of any England side’, the backpages of the papers rightfully plastered with joyful images of the game’s brightest stars.

The ripples of enthusiasm spread far beyond our social media bubbles too. England’s semi-final triumph gained a peak audience of 9.3million viewers on BBC One – making it one of the most-watched television broadcasts of the year.

A little girl in the crowd captured the nation’s hearts as she danced in delirious celebration. The players stayed on the pitch 20 minutes after the final whistle because fans simply couldn’t get enough of them.

The country is well and truly behind this England squad – and I love to see it. But as we approach the final against Germany, I am also filled with anxiety. I worry that a loss would not only mean heartbreak for this campaign, but could also undo the vital steps forward – in terms of exposure, recognition and support – that have been made over the last few years.

It’s a concern that is unique to women’s sports fans.

Beyond the media hype, the giant billboards and the deafening choruses of Sweet Caroline, there is still entrenched gender inequality in football – and we shouldn’t let the excitement of reaching a final distract us from this reality.

The men’s side also reached a Euros final in 2020, but before this they hadn’t got to the last stage of a major international tournament since 1966. Yes, there is always some backlash, grumblings of criticism, sacking of managers, when the men fail to deliver. But no matter how averagely they perform, they will still pack out stadiums, draw viewing figures in their millions, and attract wildly lucrative sponsorship deals.

A Telegraph investigation in March found that Women’s Super League players are earning as little as £20,000 a year – with even the top paid players making 50 times less than their male counterparts.

Things have improved over the last decade, but the league has only been professional since 2018, and it is still a struggle for many athletes to make a living from playing at the top level.

The fact that interest in the Women’s Euros has grown so significantly as the team continues to win games, is undoubtedly a step in the right direction. However, it also sets alarm bells ringing that this groundswell of enthusiasm might be both precarious and conditional on a world-beating performance.

In 2016, Australia’s women’s football team were unfairly torn apart in the national press for losing to a team of teenage boys, leaving players to question why a practice match warranted such wide media attention.

Megan Rapinoe was mercilessly trolled online after the USA suffered a shock loss in the Olympics last year. Some even suggested the result was justification for the women to be paid less than the men, despite the fact that it was the side’s first loss in two years.

There is, of course, an inevitability in sport that success breeds support. That is just how sport works. The more successful a team is, the more fans they will gain – Manchester United is one of the biggest clubs in the world thanks to a dazzling accumulation of trophies and league wins.

This isn’t a bad thing. The fact that new fans will start watching the Lionesses because they are doing so well is a crucial element in the growth of the women’s game. But it is vital that this support doesn’t drop off a cliff the moment the team loses a game, or has a bad run.

To make this progress really stick, we have to allow women’s sides to be average, to fail – just like the men – without haemorrhaging fans, media coverage, and financial backing from sponsors.

It’s a problem that crosses over into women’s sport more broadly. In 2018, England Netball won gold at the Commonwealth Games, beating the Aussies on their home turf in a moment that will live in my mind, rent-free, forever. It was a cataclysmic result that saw netballers on the 10 o’clock news and on the front pages of national papers.

As a life-long netball fan who spent years reporting on the sport, this recognition and sudden boost in interest felt monumental. But it was also galling to see that in order to gain this unprecedented level of mainstream support, the team had to clinch a spectacular, history-making victory. These impossibly high expectations are not placed on men’s sports.

The sport is still riding the high of this success, with England Netball recently recording its highest ever levels of participation. It shows that these moments can lead to lasting change, as long as they are handled in the right way.

As England kick off their campaign to defend their Commonwealth Games title in Birmingham this week, I hope the enthusiasm of four years ago can be replicated – whether they make it to the top of the podium or not.

Exactly a decade on from the London 2012 Olympics, a watershed moment for women’s sport in this country, we still have a long way to go to achieve a gender equality that endures beyond a specific moment of success. No matter what happens in the final on Sunday, I hope to see this enthusiasm for both the Lionesses and women’s football continue to grow.

Real progress will mean that women’s teams can underperform, get knocked out in the first round, mess up a penalty shoot-out, and still be deemed worthy of your support.