ON THE ROAD: Vincent Kompany's revolution at Burnley is in full swing

ON THE ROAD: Vincent Kompany’s revolution at Burnley is in full swing. The initial gruff scepticism is giving way to acceptance… some supporters are done with the existential fight to survive and just want football to make the heart soar

In the narrow streets around Turf Moor, they still can’t quite let go. There’s still the Royal Dyche pub, with the sign above its door depicting the man in question in breastplate and monarchical pose as he stares into the middle distance.

Still Royal Dyche lager selling inside, with 5p from every pint going to charity. Still the words ‘Sean Dyche’s claret and blue army’ at the bar and a Maxwel Cornet scarf pinned up on the way to the door, even though he’s at West Ham now.

Still the Dychian creed emblazoned on the programme sellers’ huts outside on Yorkshire Street: ‘Legs, hearts and minds.’

It was one thing to defenestrate the man but another entirely to replace him with something diametrically different. Vincent Kompany, his successor, has thrown out Route One and replaced it with what he knows: a circuitous, patient, elaborate, passing route to goal.

This can tend to make fans nervous. When the team were cautiously manipulating the ball around Preston’s pitch on the way to their fifth draw of the season last week, one of the Burnley travelling contingent could be heard bellowing: ‘Just lump it!’

It will take time to adjust to what Kompany has brought. On Saturday afternoon, Burnley’s two young centre halves standing on the six-yard box to receive the ball from goalkeeper Arijanet Muric, signed from Manchester City, where they school their keepers to pass, the home fans were curiously quiet.

The Bristol contingent made the noise. This felt a whole lot like anxiety. 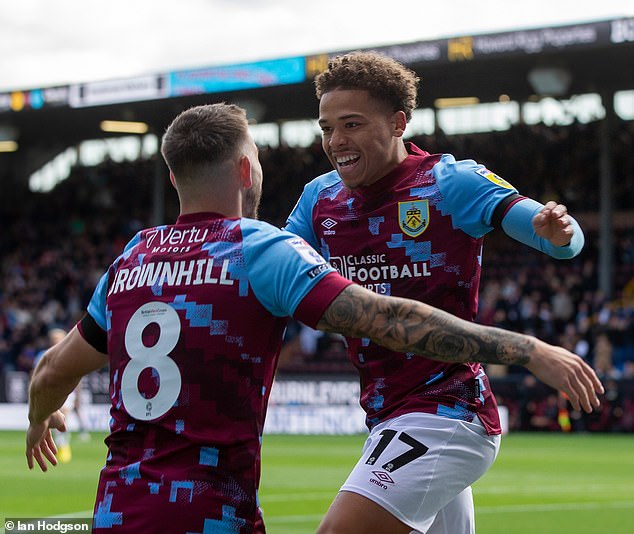 Half an hour in the Royal Dyche says a lot about how the initial gruff scepticism is giving way to acceptance. Some supporters are done with the existential fight to survive and just want football to make the heart soar.

‘How long could it all go on, the way that it was?’ says Sarah, a teaching assistant in her 30s. ‘We needed a new start.’

Kompany subsequently wound up spending £45m less than he recouped on players in the summer window, despite requiring 16 additions to replace those who left. Necessity was the mother of invention.

Though the massed ranks of Nick Pope, Ben Mee, James Tarkowski, Dwight McNeil and Cornet are scattered to the four winds now, Kompany arrived with a reputation which made Manchester City, Chelsea and Southampton prepared to bestow their talents on loan with him. 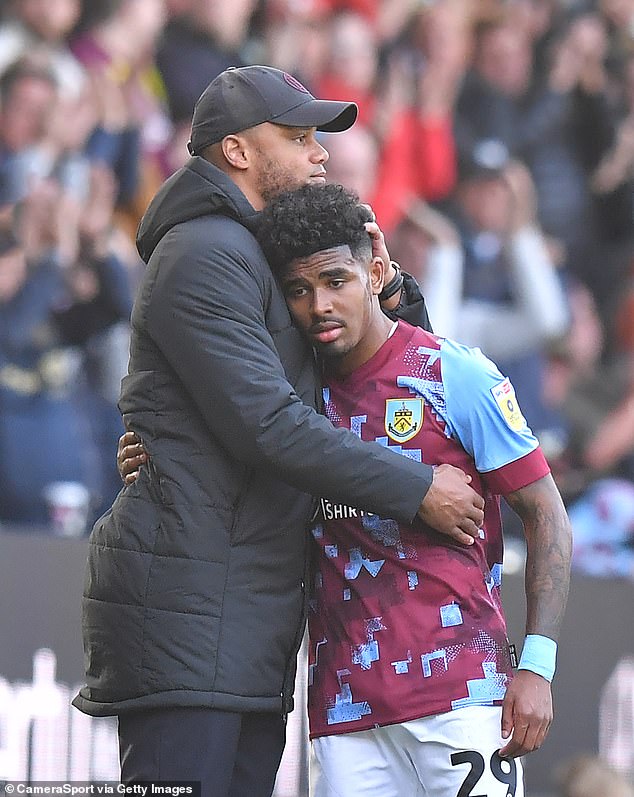 Ian Maatsen, who also found the net against Bristol City, gets a hug from Kompany

His status as a Belgium captain and Anderlecht manager has also made some of his own country’s best talent eager to follow him into these hills.

And so against that timeless and immutable Turf Moor backdrop — the sandstone back-to-back terraces, cotton mills and industrial chimneys with the east Pennines stretching beyond them — this ground has seen a new kind of football begin to bear fruit, with young, technically gifted players at its core.

Manuel Benson, recruited from Royal Antwerp for £3.6m, is being hardened to the Championship by being positioned against the most aggressive full backs in training by Kompany and never granted a free-kick in that environment.

He collected a loose ball and was away before Bristol City’s Alex Scott could lay a foot on it, racing into the area to score off the inside of the post. 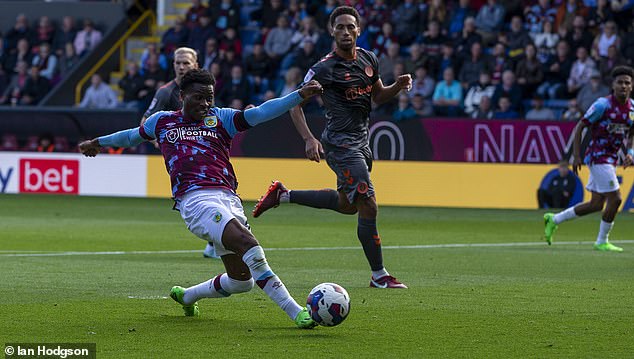 Ian Maatsen, an excellent Dutch Chelsea loanee, delivered the deftest first-time pass of the afternoon to provide Nathan Tella, the Southampton loanee, with a gilt-edged opportunity from which he should have really scored.

When the smooth passing moves reached a dead end, the ball was recycled back to Taylor Harwood-Bellis, an elegant, impressive central defender in Kompany’s own mould, loaned here from Manchester City, who began the process again.

Kompany, who also had Harwood-Bellis on loan at Anderlecht, sees him as integral to Burnley’s ambitions. 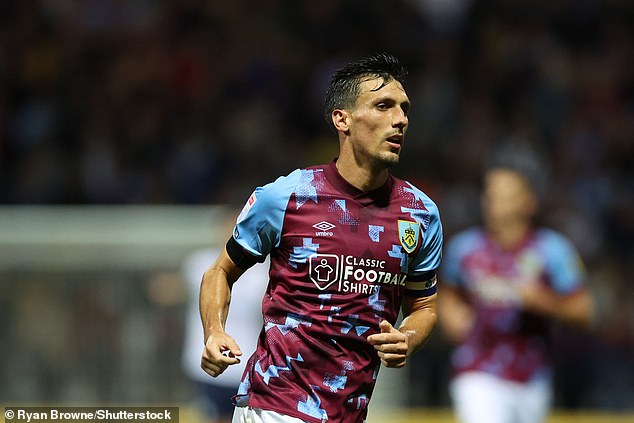 The Burnley old guard, including captain Jack Cork, have been fused into this new team

And then there was the Burnley old guard, fused into this new team and manifestly reborn. Jack Cork is the captain and fulcrum. Josh Brownhill is a No 10 for the first time in years and thriving. Jay Rodriguez, the most reinvigorated, is scoring goals.

It was he who headed in the winner, his fifth goal of the season, from substitute Johann Berg Gudmundsson’s second-half cross after Bristol’s Nahki Wells had equalised from a corner. A tendency not to make superiority count has brought five draws this season. The team held on this time.

Kompany is wise enough to insist he is sticking with other established principles. ‘Burnley has always been known as a hard-working team, with guys who are brave. That’s what I’ve wanted to keep,’ he said, after his team went fourth in the table.

Not all of the changes at Turf Moor are for the better. They’ve fiddled with the claret home jersey, introducing blue specks on to it. A beautiful jersey like that should be sacrosanct.

But to watch the players who had become so intimately acquainted with struggle and toil whipping the ball around the turf in Saturday’s brilliant autumn sunshine suggested that there is pleasure in leaving the past where it belongs.

‘You’ve got to break the cycle a bit and put it behind you,’ Kompany added. ‘Before game one there was a lot of uncertainty but today there’s music in the team. It’s a team that is at least giving hope. And hope is important.’