In front of a crowd of 10,000 on Tyneside, the 21-year-old headed Steve Bruce’s side ahead in first-half stoppage time and that proved enough for the win as there was no way back for the Blades.

The result confirms that Sheffield United will finish bottom of the Premier League this season, while the three points lift Newcastle back above Brighton and up to 15th in the table.

Man of the match: Joe Willock

How Newcastle won it

Newcastle started brightly, responding to the urgings of the crowd, with Miguel Almiron soon testing Aaron Ramsdale and palpable excitement whenever the ball was at Allan Saint-Maximin’s feet.

But it was Sheffield United with the first clear opening of the game and David McGoldrick, relatively impressive for the bottom club this season, who should have found the breakthrough.

Instead, when the experienced Republic of Ireland international forward ran clear of the Newcastle defence he could only measure his side-footed finish just the wrong side of the far post.

It looked to have proven costly when Jonjo Shelvey headed the ball goalwards from close range on 27 minutes but Blades goalkeeper Ramsdale produced a stunning save to deny him.

Steve Bruce named an unchanged Newcastle side from that topsy-turvy defeat against Man City, with the same names on his bench, too.

There was only one change for Sheffield United – Jayden Bogle coming in for George Baldock, who was not in the matchday squad. That meant Daniel Jebbison started again.

Newcastle continued to step things up as the half wore on with Saint-Maximin usually the catalyst, his astonishing dribbling skills causing all sorts of problems for the Sheffield United defence.

Joelinton missed a good chance in first-half stoppage time when he headed over following a fine cross by Jacob Murphy but the Newcastle wing-back did have his assist just moments later.

There was nothing Ramsdale could do to stop Willock’s close-range header – the on-loan Arsenal man becoming the youngest player to score in six consecutive Premier League games. 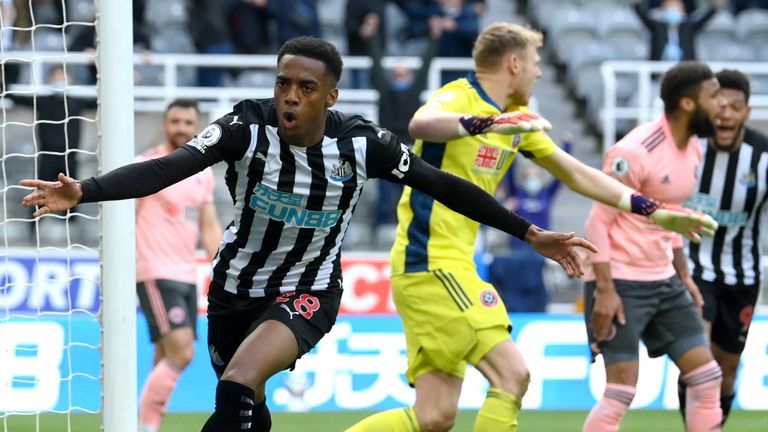 Oliver Norwood skied a decent chance over the bar but as the away team pushed for an equaliser, gaps appeared at the back and Saint-Maximin was a constant threat on the counter-attack.

Even when the flying winger went off injured, Willock’s appetite remained undimmed, powering through the middle and firing off a shot from distance that was straight at Ramsdale.

But with only a goal between the teams, Paul Heckingbottom’s men were always in it and might have snatched an equaliser through McGoldrick only for his long-range attempt to hit the bar.

That was as close as Sheffield United came, however, as Newcastle saw out the closing stages comfortably enough – the final whistle greeted by a loud roar from the returning faithful.

Newcastle wrap up their season against Fulham at Craven Cottage, a fixture in which Scott Parker’s team had briefly hoped would see them overhaul the visitors before slumping to relegation.

Sheffield United’s season concludes in front of their own supporters at Bramall Lane when they welcome Burnley. The Blades were sixth last time they had fans in the stadium in March 2020.