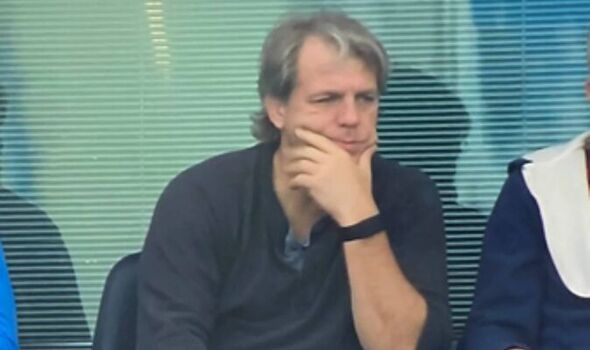 New Chelsea owner Todd Boehly looked far from impressed at the final whistle in the match against Wolves after visiting Stamford Bridge for his first game since his takeover was confirmed. The Blues appeared to be heading for a straight-forward 2-0 win after Romelu Lukaku scored twice.

Francisco Trincao then cut the deficit in half, which galvanised the visitors to hunt for an equaliser in the final few minutes. And Conor Coady scored with the last kick of the game to send the Wolves fans crazy behind the goal.

Cameras quickly panned to Boehly in the stands with his head slumped into his hands. And the American businessman was shaking his head as the players were leaving the field.

Boehly had an eventful introduction to life as a Premier League team owner in the first half after getting his first taste of VAR. The LA Dodgers co-owner saw goals from Timo Werner and Ruben Loftus-Cheek chalked off for a foul and offside respectively.

Just minutes later and Lukaku doubled his tally for the day with a brilliant finish and Chelsea looked to be heading for a much-needed win. But Wolves rallied in the final 10 minutes with Coady eventually scoring a dramatic equaliser late on.

The result leaves Chelsea four points clear of Arsenal, who have a game in hand on Thomas Tuchel’s side. They’ve also now won just one of their last five league games with Boehly facing a challenging summer transfer window.

The American owner’s £4billion bid to takeover Chelsea was confirmed on Saturday morning by the club.

The statement read: “Chelsea Football Club can confirm that terms have been agreed for a new ownership group, led by Todd Boehly, Clearlake Capital, Mark Walter and Hansjoerg Wyss, to acquire the Club. Of the total investment being made, £2.5bn will be applied to purchase the shares in the Club and such proceeds will be deposited into a frozen UK bank account with the intention to donate 100% to charitable causes as confirmed by Roman Abramovich.

“UK Government approval will be required for the proceeds to be transferred from the frozen UK bank account. In addition, the proposed new owners will commit £1.75bn in further investment for the benefit of the Club.

“This includes investments in Stamford Bridge, the Academy, the Women’s Team and Kingsmeadow and continued funding for the Chelsea Foundation. The sale is expected to complete in late May subject to all necessary regulatory approvals. More details will be provided at that time.”