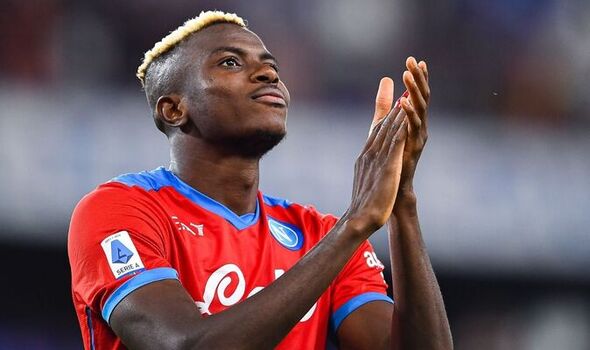 Victor Osimhen has reportedly disclosed that he’d be willing to join Arsenal over Manchester United and Newcastle this summer. The Nigerian frontman has worked his way onto Edu and Mikel Arteta’s striker shortlist and now he would be prepared to make the switch to north London after just two seasons in Italy.

Osimhen is a player Arsenal as a club know all too well. Former manager Arsene Wenger tried to sign him after he impressed at the U17 World Cup in Chile.

The iconic French boss actually held personal talks with Osimhen, who has since gone on to become one of the most highly-rated strikers in world football.

According to Italian newspaper La Gazzetta dello Sport, Osimhen would be prepared to join the Gunners over both United and Newcastle, who are both also interested in a deal.

The 23-year-old has 17 goals in 29 outings so far this season for Napoli but there is an overriding feeling of disappointment after their Scudetto hopes went up in smoke.

Osimhen is now valued at around £80million and would cost close to that figure if he was to leave Napoli this summer.

There has already been background meetings between the club and his reps over his future in recent weeks – sparking suggestions he will look to move onto pastures new.

Napoli recently blew a 2-0 lead to lose 3-2 at Empoli, sparking an inquest into the club’s collapse in the Serie A title race.

The striker wants to be fighting for the biggest prizes of all and furthermore, Osimhen wants to play Champions League football.

That could be on offer next season at the Emirates Stadium with Arsenal currently on course to finish inside the top-four.

United, however, are now unlikely to be back in Europe’s elite club competition – something that will work against them if they are serious about signing Osimhen.

Back in 2020, Osimhen’s brother Andrew revealed how the forward was wanted by United but he eventually swerved the move out of respect for his international team-mate Odion Ighalo.

Andrew told Complete Sports: “It is very true that Manchester United wanted Victor but he told me something like he had too much respect for Odion Ighalo to be competing for shirts with his senior colleague.

“My brother holds Ighalo in high esteem and he just didn’t see himself going to Old Trafford to battle for a striking role with the highest goalscorer at the 2019 AFCON in Egypt.”

Arsenal do have a whole host of other names on their shortlist including Lautaro Martinez and Jonathan David.

Darwin Nunez is also under consideration while Dominic Calvert-Lewin and Alexander Isak could also re-enter their thinking.

United are also admirers of Nunez, who will cost up to £67m this summer.