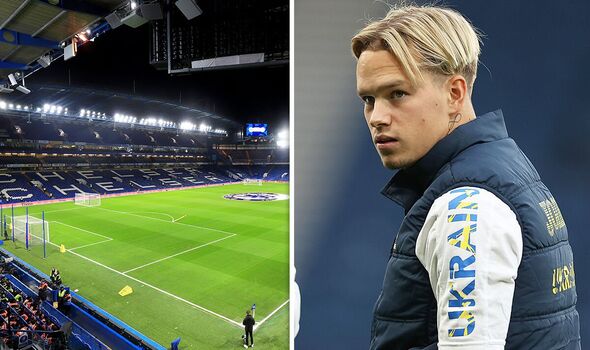 Mykhaylo Mudryk will be in the stands at Stamford Bridge for Sunday’s match between Chelsea and Crystal Palace, according to reports. The Blues have hijacked Arsenal’s deal for the Ukraine star and he has flown to London to undergo a medical.

Mudryk looked set to join Arsenal in recent days. The Gunners had submitted a third bid for their top January target and were getting closer to an agreement with Shakhtar Donetsk.

However, Chelsea blew them out of the water by agreeing to pay Shakhtar’s original asking price of £88million (€100m). Arsenal were never willing to pay that much for the 22-year-old and their west London rivals have stolen a march on them and all but secured a deal.

And Chelsea fans are set to get a first glimpse of Mudryk on Sunday. The Mail reports he will be at their game against Palace.

He will then complete his medical before returning to Shakhtar’s training camp in Turkey to tie up loose ends. Chelsea will officially announce the signing of Mudryk in the coming days.

They also tagged Mudryk’s account in their Instagram bio, as well as quote-tweeting a tweet from Shakhtar that said there had been talks between the two clubs and a deal was close. Chelsea also released a statement on their official website on Saturday evening.

It read: “Chelsea are discussing terms with Shakhtar Donetsk for the transfer of Mykhaylo Mudryk. Should a deal be agreed between the two clubs then the Ukrainian international, who can operate as a winger or a forward, will discuss personal terms with the Blues ahead of a permanent transfer.”

Mudryk is set to become Chelsea’s fifth signing of the January window. Todd Boehly is giving full backing to under-pressure boss Graham Potter, who has lost seven of his last nine matches in charge.

Striker David Datro Fofana was the first player to agree to join the Blues this month. He has been followed by defender Benoit Badiashile and Brazilian youngster Andrey Santos.

Joao Felix was the fourth player through the door at Cobham, arriving on loan from Atletico Madrid. However, he was sent off on his debut against Fulham and will now miss the next three matches.