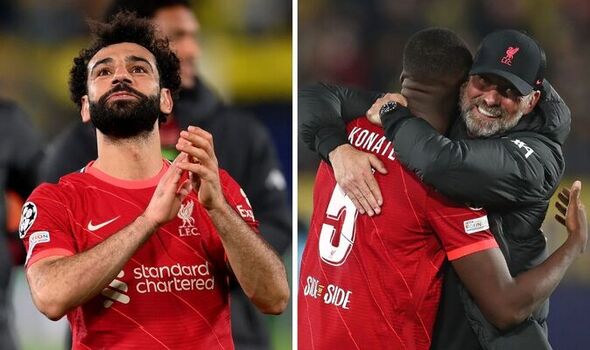 Mohamed Salah is plotting revenge on Real Madrid in the Champions League final after Liverpool booked their ticket to Paris with a 3-2 victory over Villarreal (5-2 aggregate). The Reds had to do it the hard way after trailing 2-0 at the break but Liverpool regained their composure to turn the game around courtesy of three second-half goals from Fabinho, Luis Diaz and Sadio Mane.

Now Liverpool will be waiting to discover who they face in France on May 28 as Manchester City look to hold onto their 4-3 lead against Real Madrid on Wednesday night.

Salah will be watching and rather than sitting on the fence, he made it clear he wants to take on Real Madrid, who beat Liverpool in the 2018 final and last season’s quarter-finals…

The Egyptian told BT Sport: “I want Real Madrid. Man City are a tough side but I have to be honest, I would like to play Real Madrid…

Peter Crouch then asked: “You want revenge for a few years ago?”

To which Salah replied: “Yes, of course, they beat us a few years ago so hopefully we can do that if we get them.”

His manager Jurgen Klopp was not of the same opinion though – insisting he does not have a preference as to who Liverpool will face.

“Yes I will be watching but I don’t mind who we get, whoever it is it is going to be massive,” he said.

If it is Real Madrid, Salah will be on his very own personal mission to exercise the demons of Kyiv, where he left the field in tears after a tangle with Sergio Ramos saw him pick up a shoulder injury.

Liverpool’s top scorer did net on his way to helping the Reds secure European Cup number six in Madrid in June 2019 but beating Los Blancos would be extra special.

Virgil van Dijk was also in agreement with Klopp that he does not care who Liverpool will face.

He said: “No [preference]. Any team that we’ll face in the final will be a nightmare to play against. We know City in and out, they know us too.

“We know they can adapt against us, we know how intense those games are. Real Madrid are Real Madrid.

“Such a big club, very inform striker at the moment, but we’ll see tomorrow. I’m gonna watch it and recover, and see what outcome.”

Liverpool now know that the Champions League final could be the final piece of the puzzle in their quest for a historic quadruple.

The Reds are just seven victories from glory but will want to continue taking it one step at a time.

Next up is Tottenham in the Premier League on Saturday evening and Spurs are full of confidence after their 3-1 triumph over Leicester on Sunday.

Spurs are continuing to chase down Arsenal in the race for Champions League football and Antonio Conte’s side will be looking to spring a major surprise at Anfield.

Liverpool, who need Manchester City to slip up in order to win their second Premier League crown, also have an FA Cup final against Chelsea to look forward to.