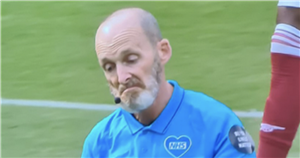 Mike Dean is set to stay on as a Premier League referee next season despite reports suggesting he would step down at the end of the 2020/21 campaign.

The 52-year-old has been a top-flight official for over 20 years, dishing out the most red cards in the division and creating controversy aplenty.

While he is one of the most highly respected officials in the game, Dean has almost certainly incensed every set of Premier League fans at some point in his hilarious and contentious career.

And amid The Athletic’s claim that he will be continuing next season, Daily Star Sport has taken a look back at some of his most iconic moments – both the good and the bad.

We begin with one of the most amusing Dean clips there is, coming during Tottenham’s Premier League clash with Aston Villa at White Hart Lane in 2015.

Mousa Dembele tucked away a superb finish from close range, sparking jubilant scenes amongst the home faithful – and Dean appeared to enjoy it just as much.

The box-office referee almost celebrated the goal by running past Dembele and his Spurs team-mates before turning and pointing to the centre circle while pumping his arm in the air. Vintage Mike.

Throughout his career Dean has been accused of arrogance and lacking compassion, and his decision to hand Raheem Sterling a second yellow card away at Bournemouth in 2017 explains why.

After scoring a 97th-minute winner for Man City at the Vitality Stadium, Sterling ran to celebrate with the visiting supporters, some of whom spilled onto the pitch,

Despite not appearing to do much wrong himself, the England star was brandished a second booking by Dean for excessive celebrations, which baffled both him and manager Pep Guardiola.

The majority of referees dish out their cards with little to no fuss, simply cautioning or sending off the player in question before getting on with the game. Not Mike.

On some occasions Dean actually manages to showboat while handing out hards, with his no-look booking during a 2016 Merseyside derby at Goodison Park essentially making him the refereeing equivalent of Ronaldinho. Absolutely majestic.

We’re back with another of Dean’s less breathtaking decisions over the years, which saw West Brom manager Slaven Bilic sent to the stands merely for trying to converse with him at the half-time break.

Despite approaching him calmly and fairly to ask about a controversial decision in their clash with Everton last September, to everyone’s surprise Bilic was brandished a red card at Goodison Park.

The Croatian said after the game: “I know that I have done nothing wrong, or my intention was not to do anything wrong, just to have a small chat, which I as a manager think that I am entitled to have.”

This next clip of Dean sending off Lewis Dunk for Brighton against Bournemouth in 2018 is either refreshing humour from a referee or pure arrogance from a man drifting too far above his station. It’s very much up for debate.

When reaching into his pocket to show Dunk his second yellow card and then a red, cameras appear to spot Dean mouthing: “Off you pop.”

By sending off West Ham midfielder Tomas Soucek for a brush of an elbow on Fulham’s Aleksandar Mitrovic that was clearly accidental back in February, Dean played his part in one of the most appalling decisions made yet with VAR in place.

As the Hammers lined up a free-kick, Soucek touched Mitrovic’s head with his elbow ever so slightly as he tried to move past him, but after consultation with the pitchside monitor and VAR Lee Mason, incredibly Dean chose to hand him a red card.

The dismissal was soon overturned on appeal, and Dean later revealed that he received death threats over the decision.

We really have saved the best until last here.

Being a lifelong Tranmere supporter, Dean made the trip to the New Lawn for their League Two playoff semi-final against Forest Green in 2019 and could be seen going wild in the away end when they made it through to the final.

He has even confessed to singing “the referee’s a w*****” while watching his beloved team at times. What a man.