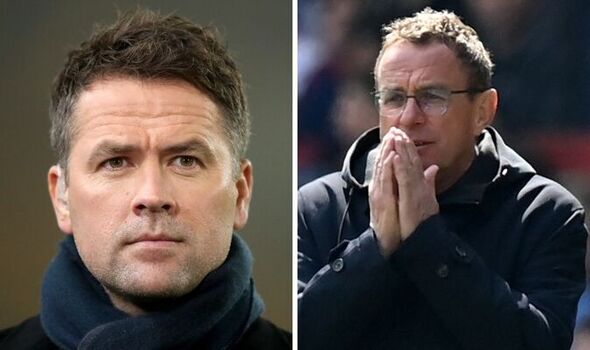 Michael Owen wants to see Ralf Rangnick play some of Manchester United’s “promising youngsters” this evening against Brentford. United have just three games remaining in what has been a hugely disappointing campaign on the red side of Manchester.

Last summer promised so much after the signings of Jadon Sancho, Raphael Varane and Cristiano Ronaldo. After finishing second last season, many were tipping United for a title challenge but Ole Gunnar Solskjaer struggled to mould his group of world-class individuals into a cohesive unit.

The Norwegian head coach was eventually sacked after a disastrous 4-1 defeat to Watford back in November with Rangnick eventually appointed as his temporary replacement. After steadying the ship through Christmas, results and performances have once again dipped leaving United fighting for a spot in Europe next season.

The Champions League places now appear to be out of reach and they could even miss out on the Europa League with West Ham just behind them in seventh. Owen doesn’t feel as though United have much to play for in the final three games of the season though.

And the former England international believes the game against Brentford is a good chance for Rangnick to field a few of the club’s youth players.

“Now United have little to play for, I’m curious whether Ralf Rangnick will change the personnel,” Owen wrote in his column for BetVictor. “There’s a lot of promising youngsters at the club, now would be an ideal opportunity for them to get some game time ahead of the new boss coming in this summer.

“Brentford have had such a great season and can travel to Old Trafford full of confidence after that draw against Spurs. They’ve been very organised in recent weeks, and make it difficult for each side they face.

“I’m still going to pick United. Brentford will be difficult to break down, I’m going for 1-0.”

Rangnick confirmed in his press conference last week that Jadon Sancho will likely miss the remainder of the season through illness. But Fred, Jesse Lingard and Aaron Wan-Bissaka could be available after missing the game against Chelsea.

Shola Shoretire, Hannibal Mejbri and Alvaro Fernandez were all named on the bench against the Blues last week while Alejandro Garnacho came on for the final few minutes. All four players could feature in some capacity this evening against Brentford with Rangnick expected to make a number of changes.