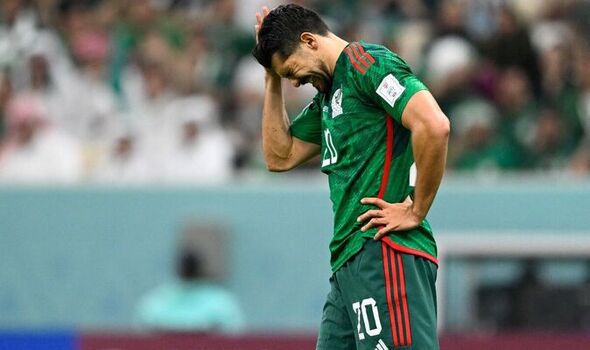 Mexico have been knocked out of the World Cup with Poland avoiding an anxious wait on the never-before-used yellow-card rule. Group C was wide open for all four teams to progress into the last 16.

But it ended up being a straight shoot-out between Mexico and Poland for second place with Argentina leading Robert Lewandowski’s side 2-0. Mexico had also taken a commanding 2-0 lead over Saudi Arabia, which puts them level on points with Poland for second.

Remarkably, Mexico and Poland were also level on goal difference and goals scored. Having drawn their respective group match against each other, it meant that if scores stayed the same that second place in Group C would be decided by their disciplinary record.

Mexico star Edson Alvarez then got himself booked early in the match against Saudi Arabia. But there was then a nervy end to the Poland match after Grzegorz Krychowiak picked up a yellow late in the game.

Poland eventually held on without any more yellows, meaning Mexico had to score one more time against Saudi Arabia or else they would be knocked out. The match between Mexico and Saudi Arabia was still being played when Poland’s game against Argentina had finished as the North America nation looked for a third.