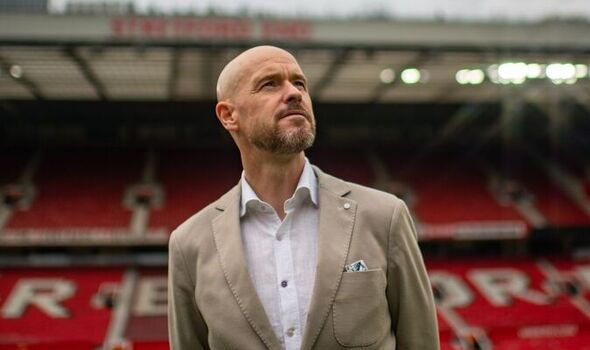 Manchester United are preparing to ramp up their transfer plans upon Erik ten Hag’s return from his family holiday in Ibiza. The Red Devils have been operating with an open-mind in recent weeks but there is a reluctance to rush into business given that the Dutchman wants to ensure all summer signings are strategic and carefully selected as he looks to rebuild the depleted squad inherited from Ralf Rangnick.

United were interested in a move for Benfica striker Darwin Nunez but there was simply no desire to become embroiled in a bidding war with Liverpool.

Furthermore, the club denied that a meeting had taken place with super-agent Jorge Mendes regarding his client as they continued to monitor the situation from afar.

There’s a sense that United were never prepared to enter the running given the numbers involved and instead, they’re focused on other targets.

Slowly but surely, United’s vision is becoming clear with Frenkie de Jong still considered to be their top target.

Discussions remain ongoing with Barcelona and his representatives over a potential deal after Ten Hag launched a charm offensive for his former Ajax player.

De Jong would become central to his new United project, providing they can entice the player into an exit, which is now becoming more probable.

But outside of De Jong, Ajax winger Antony remains a player of serious interest to United.

Media reports in Brazil suggest there has been dialogue between United and the player’s representatives with Antony seemingly open to the move.

The 22-year-old became a talismanic cog in Ten Hag’s well-oiled Ajax machine and he is thought to be keen on exploring a deal.

Mason Greenwood’s uncertain future opens the door for a new arrival in the wide areas and Antony fits the criteria United would be looking for in the sense that he is young with high potential and additionally, he is already accustomed to Champions League football.

Ajax did not seek assurances from Ten Hag that he would not sign any of their current squad when embarking on his new venture in the Premier League.

He, therefore, has the green light to press ahead with deals for Antony and Jurrien Timber, should he wish to do so.

Antony has already made it clear he would like to play in England as he prepares to consider his future in Amsterdam.

“Ajax is the place where I feel happy. But of course, I do think about a move in the future sometimes,” he recently told De Telegraaf.

“Premier League and La Liga are the leagues I find beautiful. When the time is right, I hope to play there.”

United want to add two central midfielders to their squad while both attacking and defensive reinforcements are also on the agenda.