Manchester United put one foot in the Europa League final after they beat Roma 6-2 in the first leg of their semi-final at Old Trafford.

All seemed to be going according to plan for Ole Gunnar Solskjaer’s side after nine minutes when a lovely interchange between Paul Pogba and Edinson Cavani put Bruno Fernandes in and the Portuguese midfielder finished coolly with a deft chip.

But Pogba was then involved at the other end when Rick Karsdorp attempted to cut the ball back from the byline and, with the Man Utd man sliding in, chipped it up against the Frenchman’s arm to earn his side a penalty, which Lorenzo Pellegrini converted.

And Roma completed the turnaround 12 minutes before half-time when a silky through ball from Leonardo Spinazzola allowed Pellegrini to slide it across the box for ex-Manchester City man Edin Dzeko to bundle home.

But Cavani pulled Man Utd level three minutes into the second half with an expertly taken finish inside the box after a quick break saw him produce a devastating finish.

And it was the Uruguayan who found the third in the 64th minute when Aaron Wan-Bissaka’s shot was parried by substitute keeper Antonio Mirante, only for Cavani to tuck home from close range.

The floodgates then opened up as Fernandes dispatched a penalty when Cavani was fouled by ex-Man Utd man Chris Smalling.

Pogba headed in a fifth following a wicked delivery from Fernandes and Mason Greenwood rounded things off after a sumptuous pass from Cavani as the hosts romped home in style.

Here are five things we learned from the game at Old Trafford.

Cavani’s clinical finishing is always highlighted as a major part of the Uruguayan’s game – his two ruthless strikes will grab the headlines.

But it is link-up play which is criminally underrated, a superb facet of his game which allows Man Utd to bring Bruno Fernandes into the game so effectively.

The slip through to his Portuguese teammate sliced open Roma for the opening goal – Cavani showing off the wonderful ability he possesses with his back to goal.

And then the delicious pass with the outside of his boot for Greenwood’s goal late on was simply majestic. 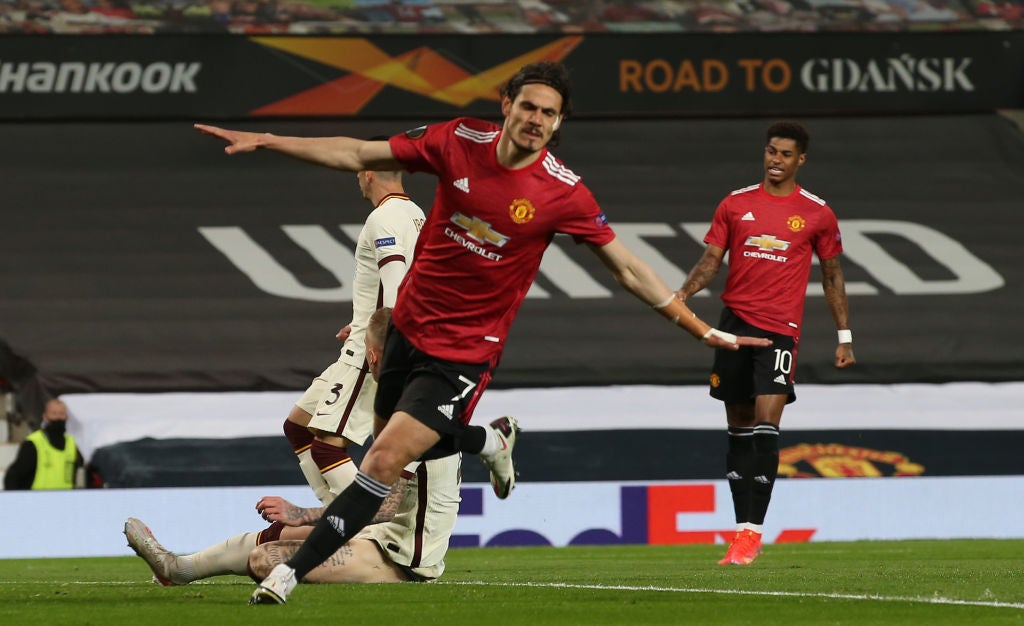 Cavani’s approach play and finishing make for a sensational combination

Injury chaos for Roma as trio go off in first half

Roma midfielder Jordan Veretout was expected to be one of the main attacking thorns in Man Utd’s side this evening.

But just two minutes into the match the Frenchman galloped into his first sprint of the evening, before immediately feeling his hamstring and kicking the ball out of play.

Manager Paulo Fonseca was then forced to make another change when keeper Pau Lopez went off with a shoulder injury and was replaced by 37-year-old Antonio Mirante.

And then the fitness issues got even worse eight minutes from the break when Leonardo Spinazzola – who had been Roma’s main creative outlet up to that point – was also forced off with a problem.

Fonseca could have a key trio missing in seven days time, adding insult to injury on a miserable night for his side. 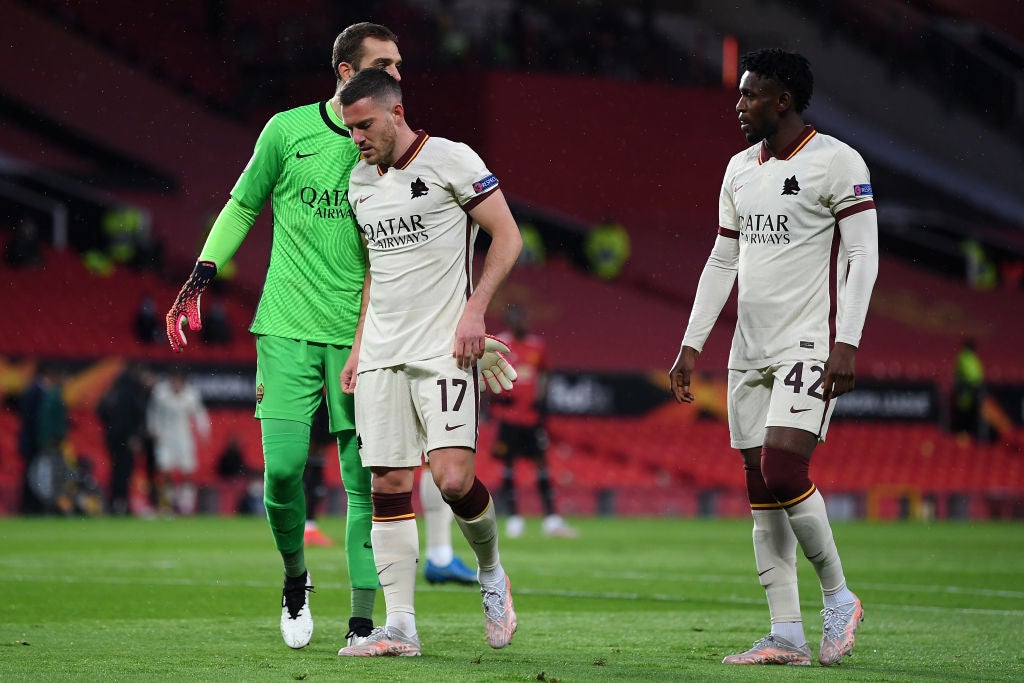 Veretout went off in the first moments of the match

Some may have questioned Solskjaer at half-time when his team were trailing and he persisted with playing both Fred and Scott McTominay.

But the Norwegian stuck to his guns and it paid off with interest.

Despite not making a substitution until the 76th minute, his side ran riot after the break, proving the balance of attack and defence was right all along.

Greenwood came off the bench to score as well, so all in all a perfect night for Solskjaer.

This evening’s game was Fernandes’ 52nd match of the season for Manchester United. His 52nd.

Yet despite the overwhelming number of games he has had to play, he continues to make an impact over and over again.

The Portuguese playmaker dinked home the first, assisted the second, scored the fourth from the penalty spot and set up the fifth with a delicious cross for Pogba.

United still struggle to create without Fernandes. But they won’t care if he continues to play with this incredibly level of consistency. 26 goals and 16 assists for the season. 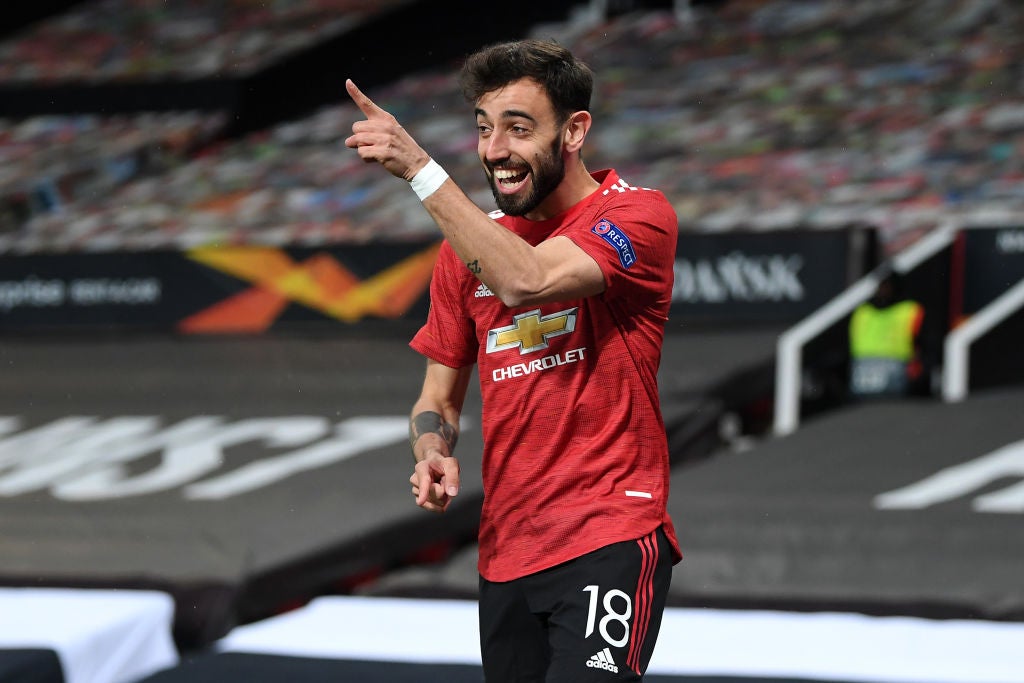 Fernandes was on top form once more for Man Utd

But it was not a happy return for the central defender as he was at the heart of a second half capitulation from the Roma back line.

And his evening was typified 26 minutes from time when he rashly took Cavani out at the near post to hand Man Utd a penalty which Fernandes dispatched.

Not the welcome back the ex-England international would have envisaged. 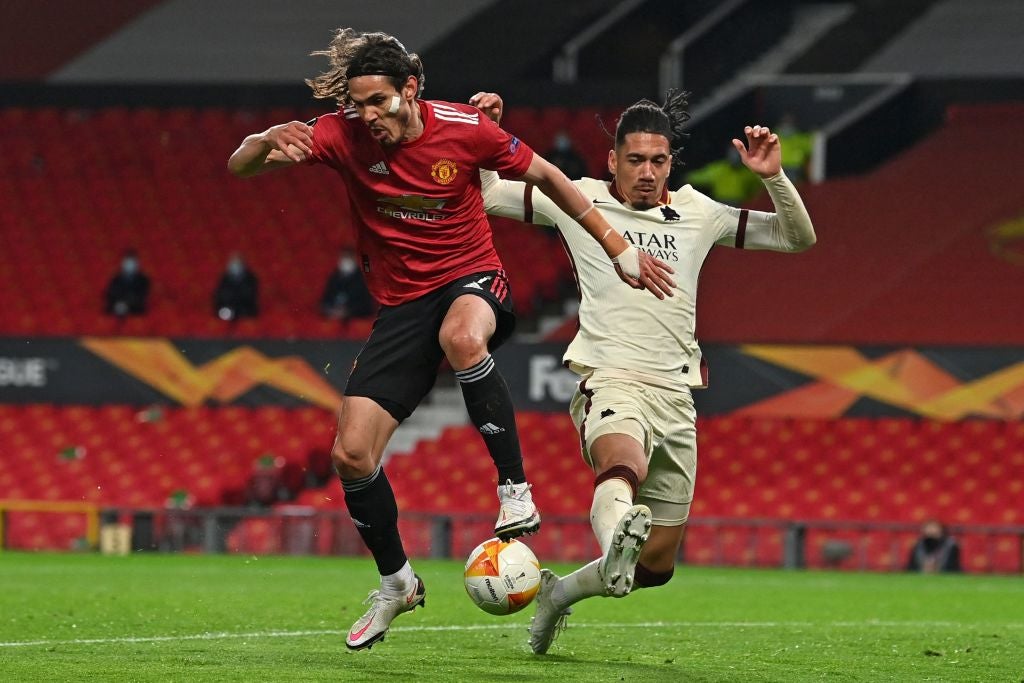