Pep Guardiola has admitted Manchester City must find a way to get Erling Haaland more involved in their play.

The Norway international was a peripheral figure in Saturday’s 2-1 Premier League derby defeat to Manchester United, having only a couple of half-chances and just 19 touches in the match.

Haaland has now gone three games without a goal – hardly a crisis, particularly as he was only a second-half substitute at Southampton, but a dip by the standards of a player who had 27 in his first 21 outings. 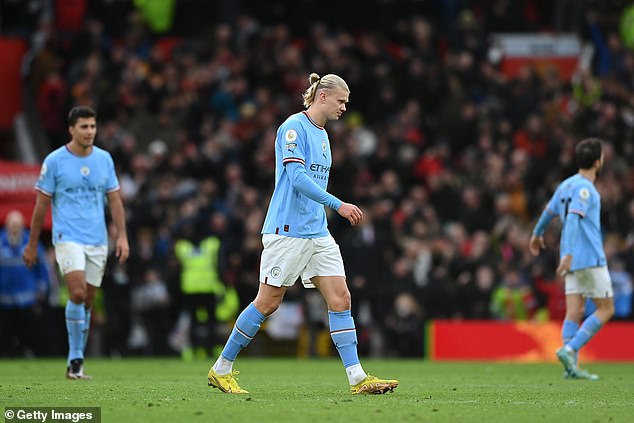 But more noticeable has been the impact Haaland has had on City’s system after they became so accustomed to – and so successful at – operating with a false nine in the past two seasons.

Former City midfielder Didi Hamaan used social media on Saturday to claim City ‘were a better team without Haaland, even if he scores 40 goals this season’.

Guardiola is unlikely to agree with that but he is still working to fully integrate his £51million summer signing. 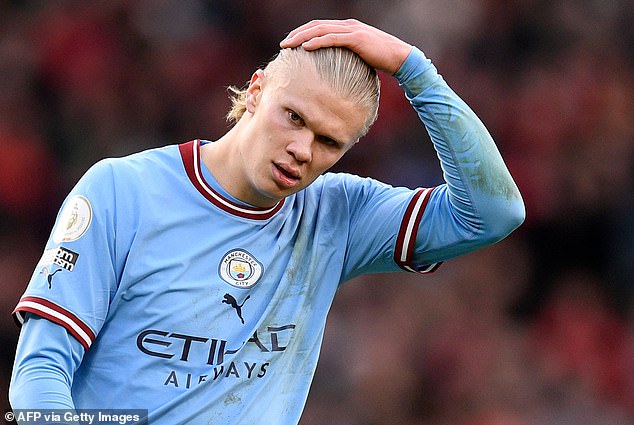 ‘At the moment we have that process because when teams are sat in their 18-yard box, it is more difficult but we have to find him a little bit more, yes,’ Guardiola said.

‘(Against United) he had enough touches but it’s true that when you are looking at areas and you have to look at him. But we will do it.’

City have struggled for consistency this season, particularly since the World Cup, drawing at home to Everton on New Year’s Day and now suffering back-to-back defeats against Southampton in the Carabao Cup and United in the league.

But Guardiola said the such inconsistencies were not down to the change in system that Haaland’s arrival has enforced.

‘I would say the inconsistency was in terms of results but not performances,’ he said. ‘In general, (but) not against Southampton, we were consistent in our games.

‘Of course, against Everton we played better, but they had one shot on target and we drew. They punished you when before it didn’t happen, we always found a way to get the results.

‘If we play good or bad, we always had that chance. I think this is our strength and we have to improve but in terms of performance, I think we are consistent.’

City took the lead at Old Trafford but crumbled after Bruno Fernandes’ controversial equaliser, allowing Marcus Rashford to score what proved to be the winner only four minutes later.

But despite disappointment at the result and frustration with the decision to allow the Fernandes goal to stand, Guardiola was much happier with the performance.