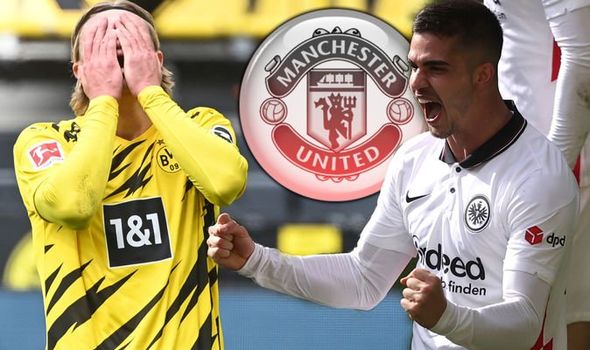 It’s perhaps beautifully poetic that the man who may have denied Borussia Dortmund a top-four finish this season is also the one being talked up as the best alternative to Erling Haaland for the many clubs keen on the Norwegian – including Manchester United.

The 20-year-old fired a blank as Dortmund fell to a 2-1 defeat to Eintracht Frankfurt, who occupy the last Champions League spot, now sit seven points ahead of the Yellow Blacks in the Bundesliga table with seven games to go.

Andre Silva was the man to put Dortmund to the sword with an 87th minute back-post header from Filip Kostic’s cross at the Signal Iduna Park.

Frankfurt’s No 33 now stands on 22 goals in 25 Bundesliga appearances, with five assists to add to that. That puts him on one goal involvement more than Haaland and only less than Bayern Munich’s Robert Lewandowski, who has 35 goals and six assists.

His latest effort was a pointed message: ‘Hey, don’t forget about me!’ Haaland may be the talk of the town but Silva is having just as good a season.

Since joining from AC Milan, Silva has produced 39 goals and 12 assists in 64 appearances having been signed as the long-term successor to Luka Jovic.

Silva’s consistency throughout the current campaign has been admirable, never going more than two games without a goal in the German top flight. He has contributed almost 50 per cent of his team’s league goals. 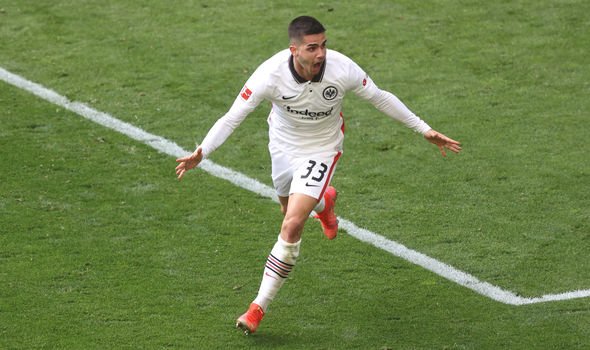 And aged only 25, ex-Porto and Sevilla centre-forward Silva still has the peak of his career to come if he can maintain his current rate of performance.

The Portuguese frontman, who has 16 in 38 at international level, looks set to fire Eintracht into the Champions League for the first time since they lost the European Cup final to Real Madrid in 1960.

In doing so, he might end up becoming the most prolific top-flight scorer in the club’s history, with Bernd Holzenbein boasting the current record after netting 26 league goals in 1976-77.

And while Champions League qualification may strengthen and improve the Hessians’ desire and ability to keep their prolific striker, Silva might jump at the chance to join a club of Man United’s size.

Silva’s late goal against Dortmund was a notable reminder to the Red Devils that he is a credible alternative to Haaland, who actually missed several chances throughout the match.

Haaland may be edging closer towards the exit door, if Dortmund miss out on the Champions League, but that does not necessarily mean his private jet will be landing in Manchester. 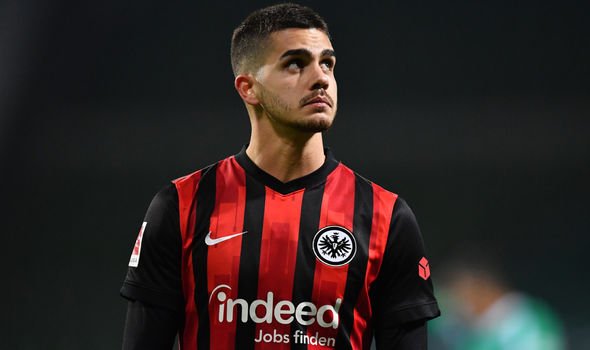 And if he heads to Manchester City, Chelsea, Barcelona or Real Madrid instead, Silva can be a much cheaper – yet still effective – alternative for United.

Valued at £37.8million by Transfermarkt, Silva claimed in March that he heard his price tag is closer to £26m.

That would make him £110m cheaper than Haaland, for whom Dortmund will demand £127m (€150m) this summer as they seek to avoid losing the Norway international.

And the Portuguese is showing that he has matured from his disappointing spell with Milan, which yielded only 10 goals in 41 games.

This season he is averaging a goal every 97 minutes and has spread them out too, netting 13 on his strongest right foot to go with six headed goals and three left-footers.

Acting predominantly as the sole striker, as he would at Old Trafford, Silva has been a brilliant focal point for Eintracht in much the same way that Edinson Cavani has impressed for United.

A physical but mobile presence in a similar mould to Haaland and Cavani, a penalty box poacher with clever movement and positioning, Silva simply has to be on United’s radar if Haaland is the type of striker they want to build around.

Speculation certainly suggests he is, and he said recently: “I’ve heard rumours, but that is it. Rumours are rumours.

“At the end of this season, it’s something that gives me more motivation to work, it’s a sign that what I have accomplished has borne fruit and the path has been good.”

And given Eintracht paid just £8m for Silva from Milan in 2019, an offer of triple that might be enough to put the pressure on, particularly with his contract up in 2023.

Not to mention how much money United would save in agent’s fees, with Mino Raiola and Alf-Inge Haaland said to be demanding massive amounts to facilitate any summer move for the in-demand Haaland.

Silva might not excite the fans quite as much as it would with Haaland – but should United miss out or decide the latter is too expensive, the obvious back-up target is staring them in the face.