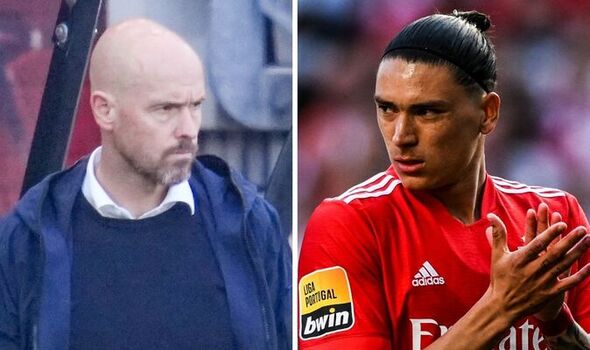 Manchester United’s incoming boss may have an advantage in his bid to sign Darwin Nunez from Benfica, according to reports. The Red Devils are set for a huge summer of change when Ten Hag arrives at the club.

A host of players will be leaving as free agents while there are also uncertain futures for Marcus Rashford, Anthony Martial, Eric Bailly and Cristiano Ronaldo among others. A lot will depend on Ten Hag when he takes charge at the end of the season and the Dutchman will want to make his mark early.

He’s expected to be given a hefty transfer budget and signing a central striker is reportedly a top priority. Erling Haaland has already gone to arch rivals Manchester City while Arsenal, Tottenham and Chelsea could also be in the market for a forward.

United will also be competing with top clubs all over Europe such as Barcelona, Real Madrid and Paris Saint-Germain. And their inability to qualify for next season’s Champions League may prove to be a handicap for Ten Hag in the window.

But United are still aiming for the stars with Nunez said to be among the list of options. Real may well be strong competitors after they lost the battle to sign Haaland, however the Mirror claim Nunez has his heart set on a move to the Premier League.

It is reported that Bayern Munich and Atletico Madrid could offer Nunez what he wants in Champions League football. But Nunez’s preference is said to be on a move to England, giving United a chance to enter the chase.

Benfica are under no pressure to sell having tied the striker down to a contract running until 2025. That deal also reportedly has a £130million release clause, although Benfica would reportedly accept bids in the region of £70m.

The 22-year-old has enjoyed a breakthrough season in Portugal this year, scoring an incredible 34 goals in just 41 games. He’s also familiarised himself with English football somewhat having impressed in Champions League fixtures against Liverpool.

Benfica may have lost in their quarter-final tie, but Nunez impressed with one goal in each leg.