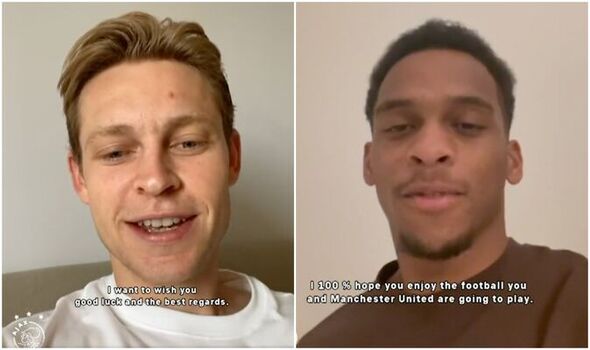 Manchester United have been told they will play ‘attractive’ and ‘enjoyable’ football under incoming head coach Erik ten Hag, according to reported transfer targets Frenkie de Jong and Jurrien Timber. Ten Hag has torn up his Ajax contract six weeks early to begin work with the Red Devils.

The incoming boss is set to keep a close eye on United’s final Premier League fixture against Crystal Palace on Sunday. Ten Hag will take over a club that has endured a disastrous season.

A busy transfer window is expected for the 52-year-old, who has been linked with a couple of his former Ajax stars. De Jong, now at Barcelona, and young defender Timber are just two of the names mooted as possible United targets.

And the pair have excited Red Devils supporters by sending messages of support to Ten Hag as he prepares to switch to the Old Trafford outfit. De Jong hailed the highly-rated coach as a ‘top trainer’ who plays ‘attractive football’, while Timber offered similar words.

In a video tweeted by Ajax, De Jong said: “It was a great time, in which you have shown results with attractive football. You have proven yourself to be a top trainer and you’ve deserved this step. I want to wish you good luck.”

Timber added: “I want to thank you and wish you good luck. You made me grow as a player and as a person.

“We did great things, achieved great things, things you can be proud of. A great step to a big club with big players and in a big competition. I hope you and Manchester United enjoy the football you are going to play.”

Midfielder De Jong has been intensely linked with a reunion with Ten Hag at Old Trafford. The Netherlands international left Ajax to join Barcelona in 2019 but has fallen out of favour under Xavi Hernandez.

United have been linked with a £75million move for the 25-year-old, although Express Sport understands that reports suggesting the deal is ‘close’ are premature. The ace played 59 games for Ten Hag while the pair were at Ajax.

The 20-year-old defender Timber is another player linked with a switch from Amsterdam to Manchester. A speedy central defender, the Netherlands international has become a key player for Ajax under Ten Hag.

Timber has played 74 times for the club, including in 30 Eredivisie matches this season. Sky Germany have reported that he is also wanted by Bundesliga champions Bayern Munich.