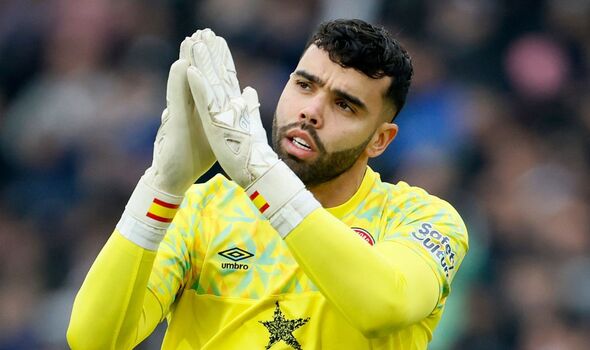 Tottenham and Chelsea could hold an integral advantage over transfer rivals Manchester United in the race to sign David Raya. The Brentford goalkeeper is the subject of strong interest from the Big Six with Thomas Frank’s side still yet to tie down their No 1 to a new, improved contract in west London.

The 27-year-old is now in the final 18 months of his current deal meaning Brentford could be forced to offload if they fail to reach an agreement over fresh terms before the end of the season.

Raya has aspirations of becoming Spain’s first-choice shot-stopper and in order to achieve that, he will need to continue playing regularly.

That is something that may not be guaranteed at Manchester United with the Red Devils still expected to stick with David De Gea, who could yet sign a new contract.

It’s believed the idea at Old Trafford is for Raya to come in and battle De Gea for the shirt.

That’s where Tottenham and Chelsea could benefit as they both need new goalkeepers to come in and make an immediate impact from the get-go.

Hugo Lloris’ powers have waned and he is now considered to be a weak link in Spurs’ team – prompting calls for an urgent replacement.

Lloris is expected to see out the season but beyond that, it seems highly unlikely he will be between the sticks next season for Tottenham.

Spurs really like Raya and are seemingly primed to make their move for the £20million-rated goalkeeper.

Chelsea could also throw their name into the mix after Kepa Arrizabalaga reclaimed the No 1 shirt from Edouard Mendy in west London.

However, it’s still an area Chelsea could seek to improve in the summer transfer window and Raya is one of the key names on their radar.

Ideally, Raya would like to play Champions League football if he is to leave Brentford.

United appear to be the best-placed club to offer that next term but as mentioned, De Gea does not seem certain to depart following his revival under Erik ten Hag this season.

Arsenal were previously interested prior to signing Aaron Ramsdale but now he has three Big Six clubs fighting it out for his signature.

Brentford boss Thomas Frank has already made it clear Raya will not be leaving the club mid-season meaning Manchester United, Tottenham and Chelsea all have until the end of the season to decide whether they should firm up their interest.

“I understand why they are interested. He is a very, very good keeper,” he told Sky Sports

“I said many times I think he is among the best in the league and he has performed fantastic for us, but he is going nowhere. Let’s see. We are interested. I know David is very happy here, but there will be ongoing discussions of course.”