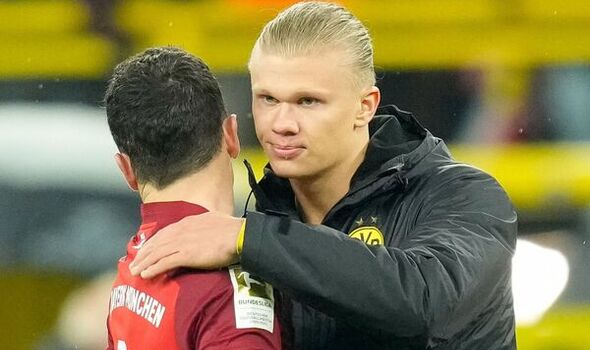 Manchester United will now be forced to concede defeat in the race for Erling Haaland after the Norwegian goal machine reportedly agreed personal terms with rivals Manchester City. While the Red Devils have not been actively working on a deal for the Borussia Dortmund frontman, he is believed to be among their dream signings, despite the financial complications surrounding any transfer. With Haaland now seemingly off the market, Express Sport assesses four alternative options United should consider bringing through the door…

It’s a hard sell trying to lure Kane away from Tottenham without assurances of Champions League football.

Nonetheless, the prospect of a new challenge could be of interest to the England captain if Spurs’ campaign once again amounts to nothing.

Problematically, though, Tottenham would be set to demand mega-money for their talismanic No 9 after rejecting multiple bids from Manchester City last season.

Kane is expected to stay put at Spurs if they finish the season in fourth but he will be desperate for the board to show Antonio Conte some backing, before committing for another season.

Express Sport understands United have watched Nunez in action for Benfica over 12 times this season.

The Uruguayan is currently one of the hottest names in Europe and is continuing to attract attention after firing 32 goals in all competitions this season.

At just 22, he is only going to improve from here on in. That’s why Benfica are currently demanding £67m, yet with several other clubs interested, that value could yet increase.

Nunez can hold the ball up and also play in behind defences, something that makes him such an attractive option.

With Lewandowski on course to enter the final 12 months of his contract at Bayern Munich, United could do far worse than exploring a deal for the Pole.

Even at 33, Lewandowski has proved he is still at the peak of his powers and he is now considered to be one of the best players in world football.

He would also seemingly be open to leaving Bayern and exploring another league outside of the Bundesliga before he retires.

If Lewandowski opts against signing a new contract with Bayern, that is the incentive for United to try their luck.

David’s reps have already confirmed that David will actively seek to leave Lille this summer.

The Canadian has built a reputation as one of Europe’s hottest young forwards during his first two seasons in France but now he wants to take the next step in his career.

He could also be available on the cheap with Lille currently looking to ease some of the financial pressure currently on their shoulders.

It remains to be seen whether David is ready to step up and lead the line for a club with the stature of United but with Cristiano Ronaldo expected to stay, he could be an ideal addition to bolster their forward line.