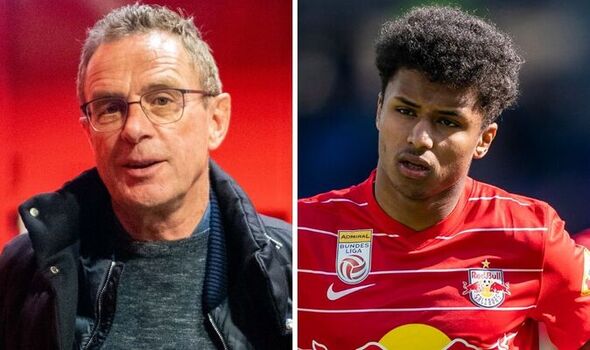 Manchester United reportedly tried and failed with a late attempt to ‘hijack’ Borussia Dortmund’s move for Karim Adeyemi. The Red Bull Salzburg forward stepped up to become a regular starter for the Austrian side following Erling Haaland’s departure in January 2020.

And the 20-year-old has earned rave reviews for his performances this season, attracting interest from all over Europe. The forward was strongly linked with a move to Liverpool before the Reds decided to bring in Luis Diaz.

That opened the door for Dortmund to swoop in for the highly-rated Germany international. The Bundesliga outfit have already reportedly agreed a fee with Salzburg to sign Adeyemi in the summer transfer window while personal terms are not said to be an issue.

No official announcement has been made yet, leaving the door open for other clubs to potentially swoop in. And Sport1 claim that United have made a last-ditch attempt to ‘hijack’ Dortmund’s agreement with Adeyemi.

It is reported that United were willing to beat Dortmund’s offer with terms worth £150,000-a-week. But Adeyemi is said to have turned down the offer as he has his heart set on a move to Dortmund.

It comes as a fresh blow for United as they head into a summer where several changes are expected to be made to their current squad. Erik ten Hag will come in as Ole Gunnar Solskjaer’s long-term replacement, but Ralf Rangnick is also likely to have a role in what United do in the summer.

Speaking just last month, the 63-year-old admitted this summer will see United undertake a massive rebuild with potentially up to 10 new signings.

“If you analyse the situation, it’s not that difficult to analyse,” he said. “The team needs a rebuild, not because some players have to go but quite a few have no contracts anymore, their contracts are expiring, then for me it’s clear there will be six, seven, eight, maybe 10 new players.

“And before you sign those players you need to be aware how do you want to play? What kind of football does the new manager want to play?

“And then take it from there and then bring every single player fitting into that kind of profile.”