Leeds United’s Raphinha is hot property with Arsenal, Tottenham and Barcelona all keen on acquiring his talents. But Manchester United could have a huge say in Raphinha’s future – and not because they will look to rival the trio to sign the winger.

Barca are thought to have had an agreement with Raphinha’s agent Deco since February and his preferred next club is believed to be the Spanish giants. But Arsenal are looking to pounce, with Spurs also lurking in the background, as Barca continue to struggle financially.

Arsenal, The Athletic claim, have had an opening bid rejected for the Brazilian, who Leeds want around £65million for. La Liga heavyweights Barca simply do not have the finances to pay that fee and the player’s wages in the midst of their economic crisis.

Barca are still unable to announce the summer signings of free agents Andreas Christensen and Franck Kessie because they need to remain within their wage cap. They need to make sales or get some current players to agree to pay cuts but they can only reinvest a third of those funds generated due to financial restrictions currently placed upon them.

MUST READ: Tottenham may gazump Arsenal’s Raphinha bid as transfer war heats up 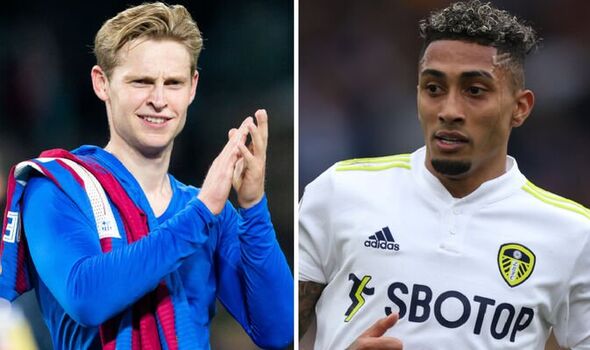 Yet Man United could do Barca a favour with Raphinha and their other targets if they eventually cough up the money for Frenkie de Jong. Negotiations to bring the Dutchman to Old Trafford have become drawn out with the two clubs still in talks.

But De Jong is the No 1 transfer target for new manager Erik ten Hag and United continue to remain hopeful of an eventual agreement. Barca, in the knowledge of their financial problems, want around £75m for the Ajax-educated midfielder. They are also thought to want every penny paid up front, having rejected a bid of £51m plus £8.5m in add-ons. 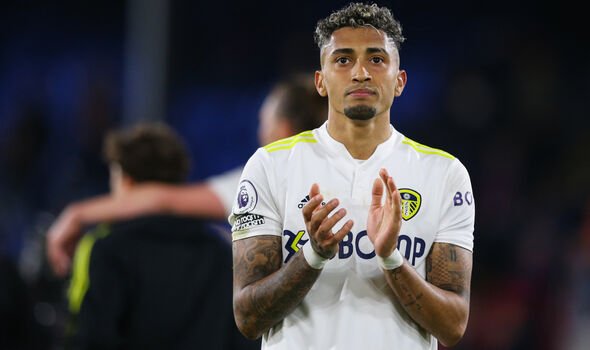 Should the two clubs agree a fee, a plausible outcome because of Barca’s need for a cash influx despite De Jong publicly stating he wants to stay at the Nou Camp, a swoop for Raphinha looks a lot more plausible. If Barca can find the money, the South American will be headed to Catalonia. It’s that simple.

For now, Arsenal and Spurs retain hope of signing the wide-man, who scored 11 Premier League goals last season. But they may only have a limited window in which they can sign Raphinha. Reports are mixed about whether the player wants to wait for Barca or whether he is ready to give up on a move, at least for a few years, due to their cash-flow issues.

The longer the De Jong saga drags on, the more hopeful Arsenal and Spurs may be of doing a deal. But United could put a significant hurdle in front of their Premier League rivals if they finally agree a fee for their top target, giving Barca the cash to fully legitimise their interest. Curiously, Raphinha’s future is in the Red Devils’ hands.