Man United's attack has put Liverpool's to shame since Christmas

Liverpool’s deadly attack fired them to glory last term… but now Man United have scored 17 goals MORE than their rivals (who are also being outdone by West Brom!) since Christmas, and their lack of cutting edge is tormenting them

When Christmas rolled around, reigning champions Liverpool once again looked like the team to beat in the Premier League.

On December 19, Liverpool had just thrashed Crystal Palace 7-0 away from home with deadly trio Roberto Firmino, Mohamed Salah and Sadio Mane all getting on the scoresheet – moving five points clear at the top of the table.

With teams continuing to falter around them, Jurgen Klopp’s men had high hopes of asserting their dominance on the Premier League by winning a second consecutive top-flight title. 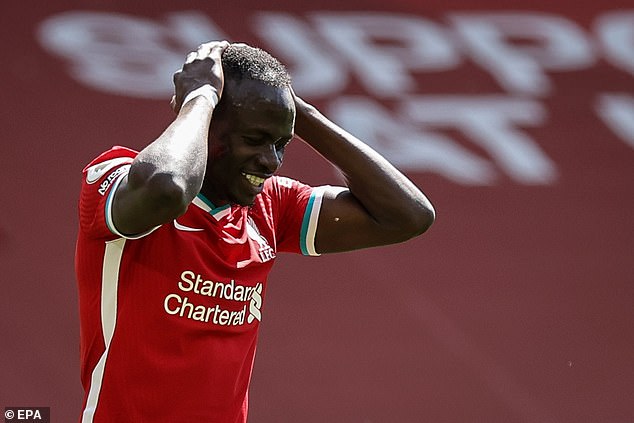 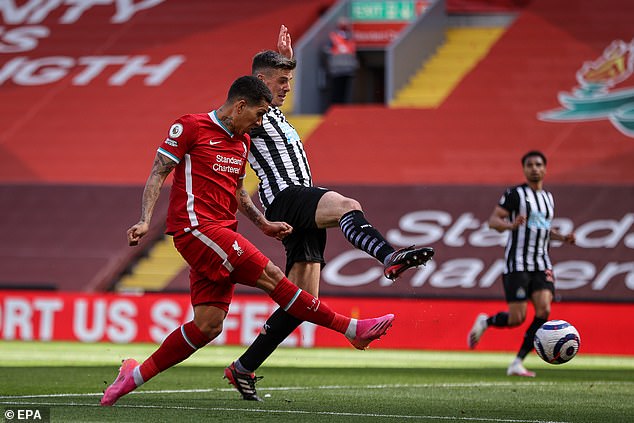 But what followed after Christmas has been nothing short of a nightmare and this weekend could see a dominant Manchester City take the crown off the Reds. But City need to win and Liverpool must beat United for that to happen.

Not only did they dramatically collapse in the title race, but Liverpool are now under serious threat of missing out on Champions League football altogether – sitting sixth with five games left, four points behind Chelsea in fourth.

And while plenty can be said about the absence of Virgil van Dijk and Joe Gomez in the heart of defence, while a more recent injury to skipper Jordan Henderson certainly hasn’t helped, Liverpool are now a shadow of their former selves in attack.

Salah, Firmino and Mane were in scintillating form last season as the club wrapped up their first-ever Premier League title, but now a lack of firepower is seriously hampering their ambitions as a team.

Liverpool rock up against arch rivals Manchester United at Old Trafford this weekend a wounded animal. And the stark contrast between both sides in attack is there for all to see.

Last season, Liverpool scored a staggering 85 goals throughout the Premier League compared to United’s 66. Only Pep Guardiola’s City side netted more than the Reds with a ridiculous 102. 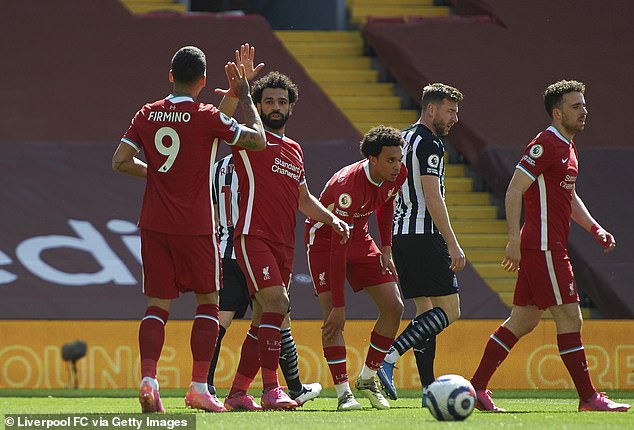 And Liverpool’s rampant form up top continued into this season, but since Christmas their attacking prowess has fallen off the cliff.

Liverpool have scored just 19 goals overall in as many matches in the top-flight since Christmas, while Sunday’s opponents United – who have been City’s closest title challengers this term –  have 36.

In fact, Liverpool find themselves in the bottom half of the table in terms of goals scored since Christmas, sitting 13th. The likes of West Brom and Burnley have more. It’s a far cry from last season.

And when you specifically look at comparisons between the respective frontlines,  it’s not hard to see why there has been a change of guard.

Take Salah out of the equation for Liverpool, and Mane and Firmino have been wasteful up top without Diogo Jota for much of the last five months.

Jota’s absence with a long-term knee injury came as a massive blow to Liverpool after his excellent start to life at Anfield. Before his setback, the Portuguese star had five Premier League goals and was delivering in the Champions League, keeping Firmino out of the team.

But after returning to full fitness, he has just three goals in the top-flight – scoring every 152.7 minutes – meaning Salah, Mane and Firmino must shoulder the burden again. 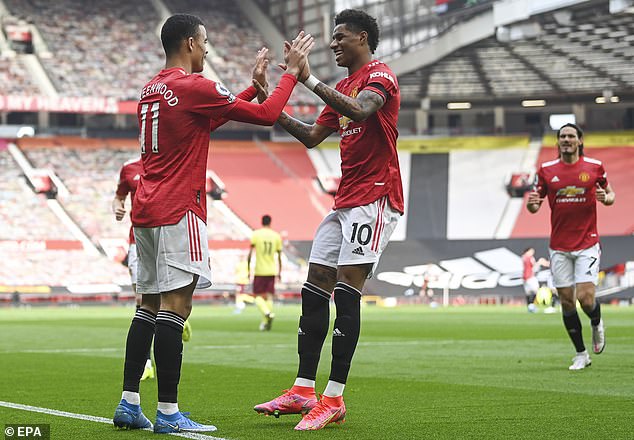 But for Man United, they are sharing the goals around and have put Liverpool’s attack to shame

Salah has seven since Christmas, but Mane (3) and Firmino (1) have just four goals between them in 17 matches – and the recent agonising draw to Newcastle summed up both players’ and Liverpool’s season to date.

The Reds missed chance after chance at home to Newcastle, and were finally made to pay at the second time of asking by Joe Willock with almost the last kick of the game.

Mane and Firmino are still getting into good goalscoring positions thanks to their clever movement and interchange but just can’t provide the finishing touch – and that shows with the former managing 13 big chances in total in 17 games compared to Firmino’s eight.

Mane has a conversion rate of just 23.1 per cent while Firmino’s is significantly lower at 12.5.

The Senegalese international is scoring once every 458 minutes while the Brazilian forward has a goal every 1,357 minutes.

The pair simply haven’t been ruthless enough, and this is further highlighted by them being well down on their expected goals ratio – with Mane’s rate at 6.2 while Firmino’s is currently 5.2.

While the Liverpool duo are finding goals hard to come by, they are instead taking on the creative mantle with Mane producing 30 chances compared to Firmino’s 19.

However, this is leaving Salah on his own in terms of carrying the load, whereas the likes of Thiago Alcantara and their flying full backs Andy Robertson and Trent Alexander-Arnold should be the ones tasked with the creative burden. 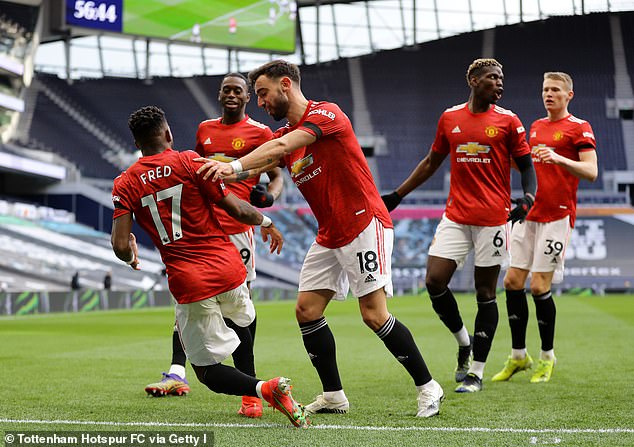 It must be noted that without Liverpool’s front three firing, they will struggle in general without a lack of clinical edge behind them.

Whereas you compare this to old foes United, and they have the likes of Bruno Fernandes and Paul Pogba to chip in with the goods from midfield.

But in general, United’s attack has been more efficient than Liverpool’s since the festivities begun at the end of last year.

The pressure has fallen to Marcus Rashford and Edinson Cavani to deliver for United up top, and while they’re not blowing the Premier League away, the pair are definitely sharing the goalscoring burden with help from midfield.

Rashford and Cavani both have five goals to their name in 20 and 15 matches respectively, with the former in fact outperforming his expected goals ratio (4).

While on the whole they may not be getting into as many scoring positions as Liverpool’s attackers, they are more clinical at present.

But as already mentioned, Ole Gunnar Solskjaer’s men – who thrashed Roma 6-2 on Thursday to all-but secure their place in the Europa League final – are sharing the attacking responsibility. 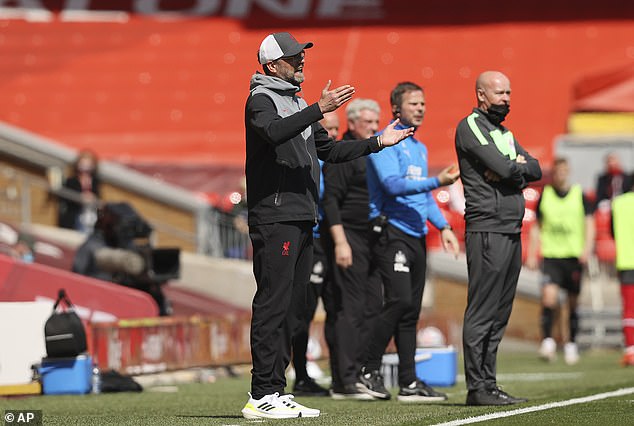 Portuguese star Fernandes, who has transformed United, is the club’s top scorer in the Premier League since Christmas with seven to his name.

Rashford and Cavani sit second with five each while Mason Greenwood (4) and Anthony Martial (3) – who has been out for the last month – are slightly further back.

For Liverpool, Salah is out on his own with seven followed by Mane and Jota who have just three each in the space of five months.

It has been a disastrous period for Liverpool, who will feel embarrassed by how their title defence has capitulated to such an extent they now are in real danger of missing out on the top four.

But there is still plenty to play for, and there would be no better time for Liverpool’s fearsome attack to get going than against their bitter rivals.

It’s last chance saloon for Liverpool in the race for European football, but if Salah, Mane, Firmino and Jota can put their struggles behind them and are firing on all cylinders on Sunday at Old Trafford, then maybe – just maybe – Klopp’s men aren’t done just yet.

If they can overcome the Red Devils in Manchester, Liverpool on their day (which is a big ask right now) would be confident of taking full points from their last four matches against Southampton, West Brom, Burnley and Palace.

Win them all, with a frontline full of confidence, and the Reds may just salvage what has been a season to forget.