Man City cruise into the FA Cup fourth round thanks to first-half goals from Bernardo Silva, who netted an early double, before Phil Foden’s long ranger sealed the win 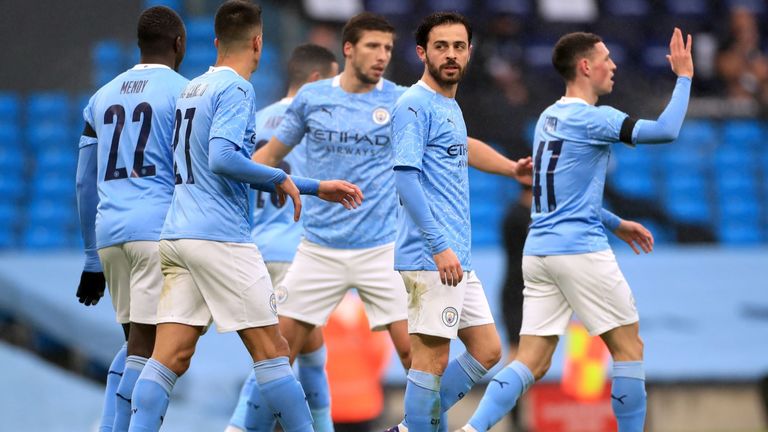 Bernardo Silva struck twice early on as Manchester City eased into the FA Cup fourth round with a comfortable 3-0 win over Championship side Birmingham.

Phil Foden also netted in the first half as 2019 winners City began their latest cup quest with a routine victory at the Etihad Stadium.

Birmingham, 18th in the Championship and without a win in their previous six games, rarely troubled the hosts aside from a Jeremie Bela-led late flurry when the result was already beyond doubt.

City could have won by more, such was their dominance, and Riyad Mahrez had a second-half effort ruled out for offside.

City had hoped their starting line-up would feature record goalscorer Sergio Aguero for the first time since October but the Argentinian, who is being eased back into action after knee trouble, did not even make the bench.

No explanation for his absence was given before the game but the club did confirm the 32-year-old was not injured and was otherwise unavailable. There were reports the player was self-isolating but these were not confirmed.

Aguero’s presence, however, was hardly required on this occasion as City made easy work of Birmingham.

Pep Guardiola’s men were so fluid, with numerous players switching positions depending on the nature of an attack, the visitors simply could not get a handle on them.

City soon established complete control and almost put the game out of sight within the first quarter of an hour.

The opening goal came after seven minutes. Joao Cancelo, who frequently drifted into central midfield from right-back, clipped the ball into the area and George Friend’s attempted clearance fell to Silva on the edge of the area. The Portuguese adjusted instantly and fired a chest-high half-volley into the roof of the net.

It was a spectacular strike and Silva was on hand again to double the lead soon after. This time it may have been a mere tap-in but the build-up was similarly impressive as City carved the visitors open.

Mahrez played in Kevin De Bruyne with a clever ball with the outside of his foot and the Belgian pulled back from the byline to present Silva with a simple finish.

It was inevitable City would score more as Foden shot wide following a neat turn and Gabriel Jesus, back in the side after returning from isolation, got behind the defence only for goalkeeper Andres Prieto to intervene.

Foden wanted a penalty after a challenge by Mikel San Jose but, had it been given, replays suggested any offence would have been outside the area.

Foden was not deterred and struck the third just after the half-hour mark. The 20-year-old took a neat touch to wrong-foot a defender following a break from Mahrez and then drilled a left-foot shot into the bottom corner from distance.

A rare Birmingham attack saw Friend have a deflected shot saved by Zack Steffen before Jesus had an effort hooked off the line by Maikel Kieftenbeld.

Silva twice went close to completing his hat-trick with efforts that hit the side-netting and rolled wide either side of the break.

City’s intensity slowed after a series of substitutions but Mahrez was unlucky to be denied by a tight offside call when he volleyed in on the hour.

Birmingham began to get a few openings in the latter stages as City eased off. Substitute Bela proved a handful, twice troubling Steffen with long-range strikes and then hitting another narrowly over.