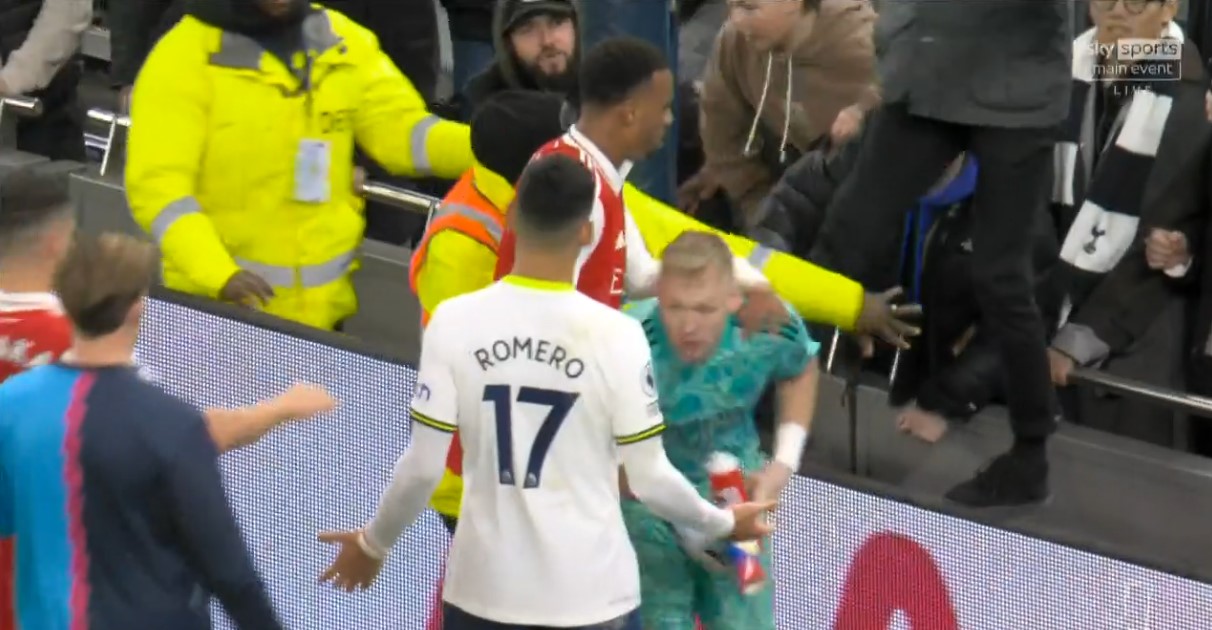 A 35-year-old man has been charged with assault after kicking Arsenal goalkeeper Aaron Ramsdale following Tottenham’s 2-0 defeat in the north London derby on Sunday.

Ramsdale, who had celebrated Arsenal’s victory in front of Tottenham’s supporters behind his goal, was kicked in the back by the Spurs fan as he went to retrieve his gloves after the match had ended.

The Metropolitan Police said in a statement: ‘A 35-year-old man has been charged with assaulting an Arsenal player after a match at the Tottenham Hotspur Stadium on Sunday.’

In their statement after the incident, Tottenham confirmed the supporter, once identified, would be given an ‘immediate ban’ from their stadium.

‘We are appalled by the behaviour of a supporter that attempted to attack Arsenal goalkeeper Aaron Ramsdale at the end of today’s match. Violence in any form has no place in football,’ Tottenham’s statement read.

‘The club has reviewed its CCTV footage to identify the supporter and will be working with the Met Police, Arsenal and Aaron Ramsdale to take the strongest possible action, including an immediate ban from Tottenham Hotspur Stadium.’

“It’s completely out of order and unacceptable”

When asked about the kick from the fan after the game, Ramsdale said: ‘The Spurs fans were giving me some and I gave them some back.

‘The few people I did do that to was well greeted [by them] and sportsmanship-like and then I’ve had someone jump over and give me a [kick] on the back. It’s a shame as it’s just a game of football.

‘Both sets of players had to bring me away. Thankfully, nothing drastic happened, and it’s a sour taste. I’m sure we’ll enjoy it when we go back to the dressing room.’

Meanwhile, Tottenham manager Antonio Conte also hit out at the attack from the Spurs fan.

‘I didn’t see it but before I was asked about it in an interview with the media. If it happened, this situation is not good. It’s not positive.